​​​​​​​​​​​​​​Powerful Snowstorm Could Impact 100 Million People From Midwest To Northeast

A powerful winter storm starting on Saturday through early next week could impact more than 100 million people across the Midwest to the Northeast.

CBS News reports from Chicago to Cleveland to Baltimore to New York, tens of millions of people could be impacted by severe winter weather starting on Saturday and lasting through Tuesday.

The system has already dumped upwards of 15 inches of rain in some parts of California and in higher elevations, up to 100 inches of snow this week. We noted earlier that an atmospheric river emanating from over the Pacific Ocean would create severe weather for parts of California that would eventually lead to a snowstorm for Midwest and Northeast states.

On Friday afternoon, the system is in the Southwest and moves eastward.

Ahead of the storm’s arrival, much of the Mid-Atlantic and Northeast are experiencing frigid temperatures.

Heavy snow is likely to fall across the Midwest and Ohio Valley Saturday night and Sunday. Chicago, Indianapolis, and Colombus could see anywhere from 6-12 inches by Sunday night. 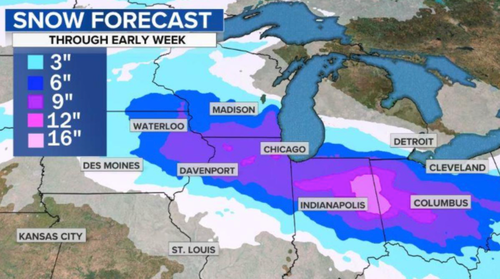 On Sunday, the system will move towards the Mid-Atlantic area, spreading snow across Virginia, Washington, D.C., Maryland, Delaware, and southern Pennsylvania.

“The snow may be heavy at times in places like Washington, D.C.,” CBS said. 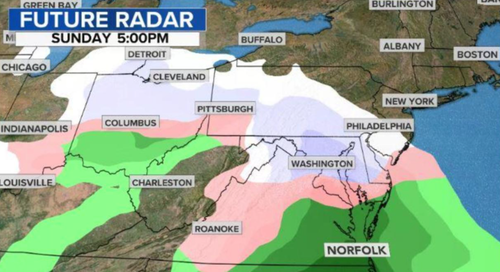 While CBS is only offering weather models of what may happen – their meteorologists ask a few questions about the potential track of the system:

“Now comes the tricky part. Does the storm slide eastward out to sea, keeping cold air locked into the Washington area and the heavy snow bullseye between D.C. and Atlantic City? Or does the storm move northeastward, burying New York City, Providence and perhaps Boston in over a foot of snow? ”

Forecasts for Monday shows New York City could get walloped with snow. 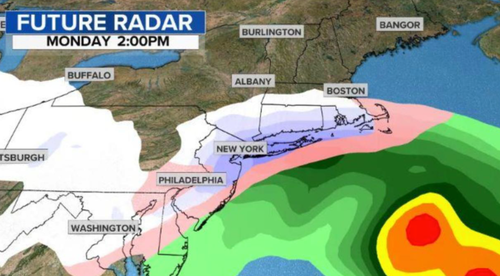 The mid-Atlantic and Northeast states’ total snowfall forecasts through early next show significant accumulation could be ahead. 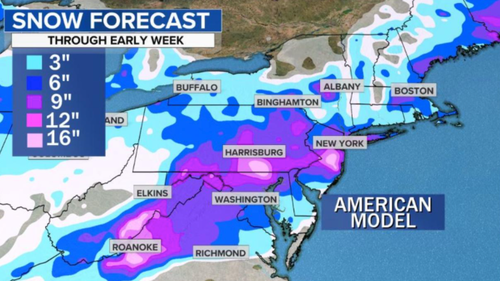 Path To A Greener Future: Tax Kids Or Just Ban Them Outright