As a ‘deep chill’ from a polar vortex split spills into much of the central US, spot natural gas and electricity prices are spiking quicker than Robinhood pajama traders pumping penny stocks, low-float biotechs, and, of course, GameStop and other meme stocks in recent weeks.

The week’s biggest story is the plunge in temperatures across the Great Plains from Canada to Texas, resulting in skyrocketing demand for natgas and electric markets as tens of millions of Americans crank up their thermostats to stay warm.

“One of the main stories is the very cold temperatures and the expanse of the cold,” Marc Chenard, a senior branch forecaster at the US Weather Prediction Center, told Bloomberg.

“Most of the country will be at or below average except Florida.” 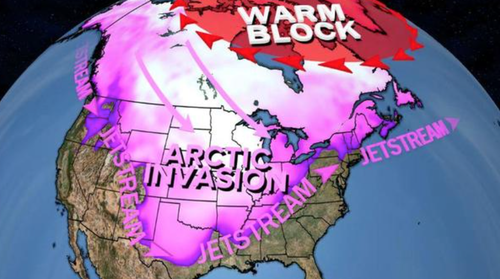 BAMWX explains a series of winter storms are possible” from Denver to Dallas to Chicago to Cleveland to Mid-Atlantic and Northeast states through next week.

“An overwhelming signal seems to be developing for a major winter storm from the Deep South to the Ohio Valley into the NE early next week. Here are our 3-7 day hazards map and a blend of models 75th percentile data. Worth note deterministic data showing major snow numbers. #Snow,” BAMWX’s official Twitter account tweeted. 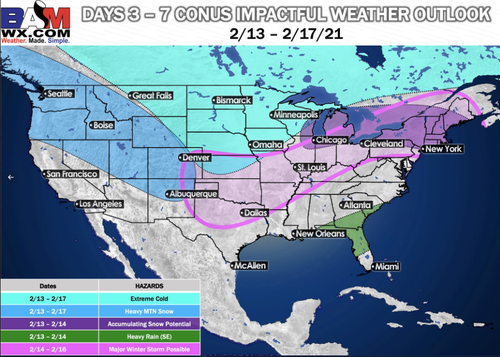 The reason the extreme weather is so critical to note is that the colder temperatures have prompted wellhead freeze-offs, cutting production receipts just when they’re most needed by customers’ demand for heating.

As shown below, heating degree days for much of the US is well above trend, which has sent the price of natgas, propane, and heating oil to heat homes surging. 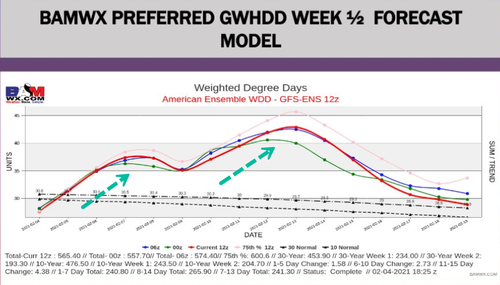 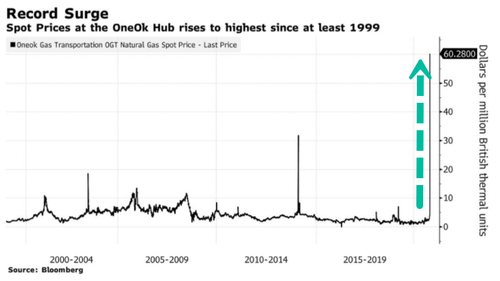 Gas prices to Houston and Chicago also surged to seven-year highs. But that’s not all. The Southern Star natgas spot (Texas, Oklahoma, Kansas) spread to Henry Hub exploded to $38. 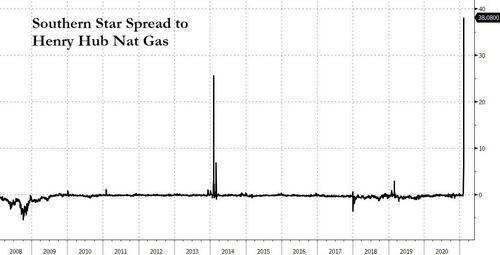 At other hubs, including ANR Oklahoma, Panhandle, and NGPL Midcontinent, prices hit their highest in seven years, topping $16, $14, and $12, respectively. 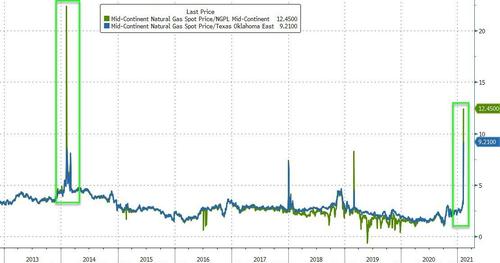 Andy Weissman, CEO, EBW Analytics, told clients in a note this week that weather forecasts are mixed regarding how fast warmer temperatures will push out the colder temperatures, but bullish catalysts remain for natgas.

The next two gas storage withdrawals “will be enormous,” Weissman said.

“Freeze-offs already are occurring in West Texas and likely to become more severe. When the market reopens next Tuesday after the holiday weekend, the picture for gas could still be bullish.”

About a month before all this chaos in the central US, the polar vortex split was dumping Arctic air into Asia and Europe, it was then when Goldman Sachs flipped its thesis on natgas, telling clients how it has gone from “bearish” to now “bullish” on the commodity.

Notably, this surge in NatGas prices has serious knock-on consequences, as it is a major input to the electricity power generation system.

As Genscape data shows, the Electric Reliability Council of Texas saw power demand for electricity usage jump on Thursday as millions in the state are experiencing fridge temperatures.

The average spot price for electricity in North Texas soared 738% to $289.40 a megawatt-hour on Thursday afternoon after spiking to $1,900 earlier in the day.

As one power trade warned:

Prices in response to the persistent cold have pushed load expectations to all time winter highs, and on par with the hottest summer days the ISO has experienced.

Actual shortages could persist if units aren’t weatherized and fail at any point.  Monday peak is currently bid 4000, and balweek inclusive of Tuesday through Friday is 1000@2000.

Off peak (nights) have traded insane levels as well, with the balance of the month trading 650$.  For reference, summer of 2018 never came close to touching these levels.

The highest trade on a balday was around 2000$, if i’m not mistaken.  The PUC is meeting today to discuss coordination and potential conservation efforts, but this event will likely crush several firms who are not collateralized enough to weather (no pun intended) the storm IMO.

And all those folks on griddy could literally be looking at paying 4$+ per KWh across the state (as opposed to 12 cents or whatever rate you got at your house), pushing power bills to the moon.

And that surge in energy costs come at a time when incomes/jobs remain suppressed and Americans are being told to stay indoors, alone.