10 Reasons Why The Fed Shouldn’t Fight The Bond Vigilantes

On Friday, Bank of America’s also controversial CIO Michael Hartnett prompted the usual firestorm of confused reactions across Wall Street when he concluded that the “uber-dovish” Fed had backfired and that vigilantes were now bullying Powell into Yield Curve Control (which he predicted would kick in once the 5Y yield surpassed 1.25%), and also shared three strategies on how to trade this.

It turns out Hartnett is not alone in assessing that the Fed has been bullied by the bond vigilantes: in a note from Deutsche Bank’s Alan Ruskin titled “10 reasons for Fed not to fight the bond market”, the macro strategist reveals “ten important reasons” why assets markets and FX should expect continued Fed aversion to fighting market forces for higher bond yields. In other words, the Fed may well accept higher (and much higher) yields before it all comes crashing down and whether he wants to or not, Powell will be forced into YCC at which point it’s pretty much ballgame for capital markets as USSR-style central planning will be the last thing that stands between the abyss of a hyperfinancialized economy where financial assets are 600% of global GDP… 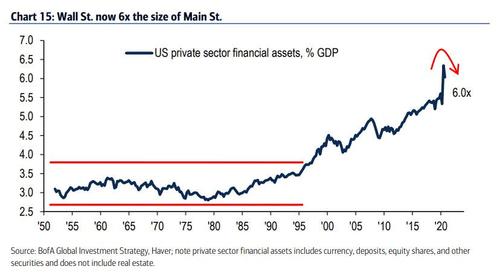 1) Absolute yields are still low by almost any measure, and extraordinarily low relative to expected nominal GDP growth – by that measure policy and rates are erring on the side of too easy.

2) It’s not all about the price of money, the quantity of money matters, and M2 growth is near all-time record highs.

3) Don’t shoot the messenger. Market signals are invaluable. Expectations, and real yields are much spoken about and already distorted by QE, don’t add to these distortions.

4) The move in back-end yields is going with the grain of the policy bias towards some desirable tightening in monetary conditions, even if the market may feel like a month or two early.

5) The back-up in yields is rational and part of the objective function. You can’t have a desired rise in growth expectations impacting real yields and a rise in inflation expectations without a rise in nominal yields. Any policy of FAIT + taper helps steepeners. The market response is rational.

6) The curve is not that steep, 10s-2s have typically peaked near 250bps when the back-end yields head higher after extreme policy easing. Get ready for more steepening. 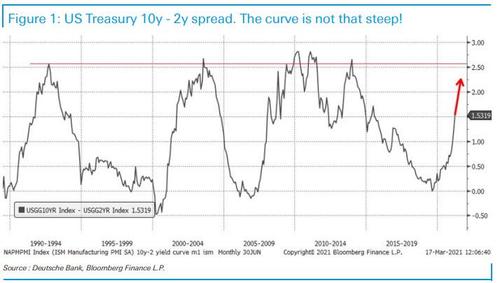 7) In 2021 the real economy will prove highly interest rate inelastic. Government spending and vaccine related service sector opening will be insensitive to the backup in yields, so there is less reason to worry about higher yields.

8) Greater intervention would risk credibility. It is so much easier to get in and intervene than get out, without causing policy credibility and market ruptures.

9) Most obviously, only long-end rates are heading higher, the remaining components of financial conditions, not least credit and equities remain extremely easy.

As Ruskin concludes, “the backdrop could obviously change, but there are some very good reasons for the Fed not to wade in, and take a heavy-handed approach to higher bond yields.” He’s right: while we appreciate his desire for a return to normalcy, all that will change as soon as the S&P tumbles 20% and the Fed finds itself scrambling to salvage a decade+ of central planning.

Rabo: Up Until Now It’s Been All China: Now It’s Going To Be All The US