$100 Billion Has Rotated Back To Value Investing, And More Could Be Coming

Heading out of the Covid era, it looks as though value investing is officially back. $100 billion has poured back into the investments that were once left for dead, as investors either “broaden the bull market”, to borrow Cathie Wood’s term from several days ago, or just become more risk adverse and head out of risky, speculative, tech plays in favor of value.

In fact, value investing, as a strategy, has now surpassed levels last seen before the pandemic, according to Bloomberg. And with $1.9 trillion more in stimulus about to hit the market, the rotation could continue. 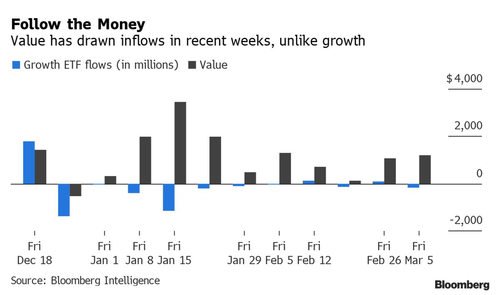 An Evercore note out Monday read: “Value crushed it for the right reasons.”

As part of the shift, value investing ETFs have brought in new money for 10 straight weeks. Assets have jumped $100 billion since the start of November, Bloomberg notes.

Now the question becomes whether or not the value trade is going to unseat the bull market in the NASDAQ, or simply join it. With trillions in stimulus making its way to the market, it’s going to be tough to tell until several more quarters pass. The chaos in the bond market of recent isn’t slowing down the rotation, either. Momentum names are suffering one of their biggest ever losses versus value, according to MSCI global indexes, during this rotation. 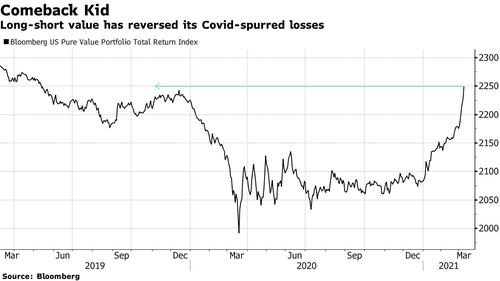 Saxo Bank strategist Eleanor Creagh said this week: “The higher that yields go, the more pressure is on that rotation.”

Value has underperformed significantly since 2008, Bloomberg notes: “Its price-to-book gap with growth remains more than twice the 25- or 10-year average and not far from the peak that preceded the burst of the dot-com bubble.” 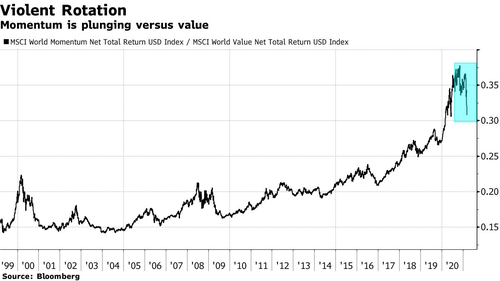 Cliff Asness, of AQR Capital Management, wrote in a paper last week that it would be “misleading” to assume that value investing – a strategy he has stuck with over the last decade – has been dead based on poor historical returns. Instead, he argued that weak performance was driven by the factor getting cheaper.

Evercore believes that with capex recovering, cyclical shares will have even more room to run: “The macro backdrop still favors value and price volatility, but the pace of returns should slow.”

Meanwhile, as we noted Tuesday, the streams have crossed…

The streams have crossed pic.twitter.com/ezwa3Ewxzy

Comrade De Blasio: “I’d Like to Say Very Bluntly: Our Mission is to Redistribute Wealth” (VIDEO)