100 Million Stimmys To Be Delivered In Next 10 Days: How Much Will Go Into Bitcoin

Moments ago Biden made it clear that the next week will see an epic inflow of new capital, much of which will be used to chase various stocks, cryptos and other risk assets.

Which again brings us to what BofA said is the “Most Important Question” for investors: Where Will Biden’s Trillions In Stimmys End Up?

To address this question, yesterday we focused on equities, where a lengthy analysis from BofA found that since much of the stimulus will likely end up with higher income households, much of it won’t be spent but rather saved, including in the form of equity allocation. We also noted a recent Deutsche Bank poll of online brokerage account users which found that roughly 37% would invest stimmy checks in the stock market. What does this mean quantiatively:

“Given stimulus checks are currently penciled in at c.$405bn in Biden’s plan, that gives us a maximum of around $150bn that could go into US equities based on our survey. Obviously only a proportion of recipients have trading accounts, though. If we estimate this at around 20% (based on some historical assumptions), that would still provide around c.$30bn of firepower – and that’s before we talk about any possible boosts to 401k plans outside of trading accounts.”

DB’s conclusion: “stimulus checks could accelerate the large inflows into US equities seen in recent months after many years of weak flow data. Will this be enough to offset any impact of higher yields? Expect this push/pull to continue for some time.”

What about that “other” asset, the one which incidentally is the best performing one YTD according to none other than Goldman Sachs? 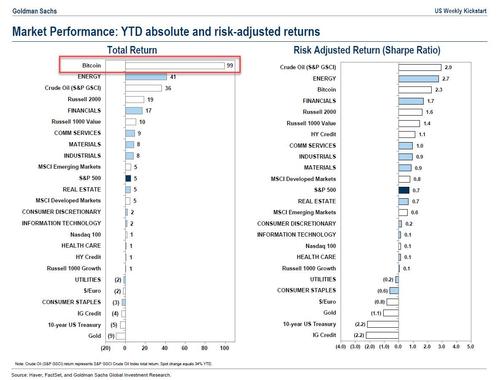 Well, according a brand new survey by Japanese bank Mizuho which polled 235 people with a household income under $150,000, and who expect to receive the latest round of stimmy cash, around 10% of U.S. stimulus checks may be used to buy Bitcoin and stocks, equating to around $40BN in total! Up to 40% of respondents said they would invest the direct payments into BTC and stocks, with 61% saying they would choose Bitcoin over equities. 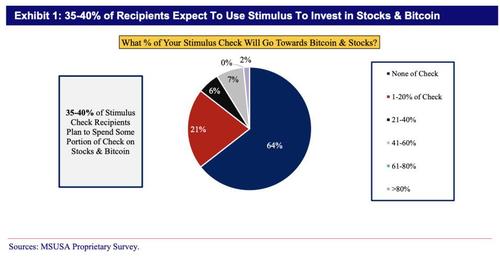 According to analyst Dan Dolev, nearly two-in-five of the recipients surveyed expect to use some portion of the money to invest, and in a novel if unsurprising twist, check recipients said they prefer Bitcoin to stocks: “Bitcoin is the preferred investment choice among check recipients. It comprises nearly 60% of the incremental spend, which may imply $25 billion of incremental spend on Bitcoin from stimulus checks,” said the Mizuho analyst. “This represents 2-3% of Bitcoin’s current $1.1 trillion market cap.”

As CoinTelegraph notes, This is the third direct payment to financially assist those affected by income insecurity during the COVID-19 pandemic. Lawmakers provided many Americans with $1,200 direct payments in April 2020, as well as $600 checks in January. Crypto users who invested the full $1,200 into Bitcoin last year may have realized as much as $10,000 in gains following the asset’s rise to more than $60,000 in 2021.

Finally, for those who say that all these newly hatched bitcoin investors will have no access to their money, you are wrong: as Reuters reports, a new feature has appeared at smoke shops in Montana, gas stations in the Carolinas and delis in far-flung corners of New York City: a brightly-lit bitcoin ATM, where customers can buy or sell digital currency, and sometimes extract hard cash. 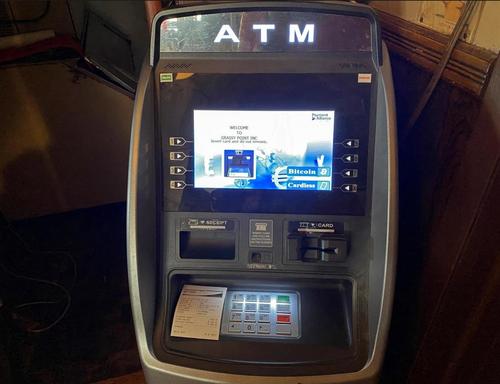 As the price of bitcoin has exploded in the past year, the bitcoin ATMs have multiplied quickly through the United States. Kiosk operators such as CoinFlip and Coin Cloud have installed thousands of ATMs, scouring areas competitors have not yet reached, executives told Reuters.

“I just assumed there was demand and people wanted bitcoin everywhere,” said Quad Coin founder Mark Shoiket, who flew to Montana after scanning a U.S. map for bitcoin ATM deserts. He is not wrong.  During a week-long road trip, he found seven places to install machines, including 406 Glass, a store in Billings, Montana, that sells tobacco, vape juice and colorful glass pipes.

As of January, there were 28,185 bitcoin ATMs in the United States, according to howmanybitcoinatms.com, an independent research site. Roughly 10,000 came within the prior five months. Some machines only offer bitcoin, while others let customers invest in various digital currencies. Few bitcoin ATMs can actually spit out cash, and they cost more than regular ATMs or transacting online.

“The growth of the ATM market – it is not even a gentle increase, it is almost a 45% increase,” said Clegg. “The growth is quite astonishing.” The only thing that is more astonishing: the increase in the price of bitcoin.

Despite FBI Fearmongering, DHS Sees No “Specific, Credible Threats” At This Time