Amid all the issues ignited in the Texas turmoil, and as oil prices roar to post-COVID highs, analysts across the energy space appear to be outdoing each other with their bullish forecasts. 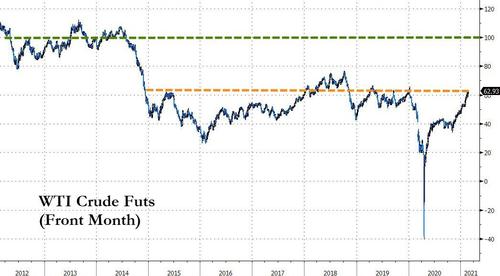 Brent Crude prices could hit $70 a barrel in the second quarter of 2021, while they are set to average $60 this year, Bank of America said this week, raising its average price outlook by $10 a barrel from its previous projection.

Echoing Bank of America, Morgan Stanley also sees Brent touching the $70 mark this year, but a bit later – in the third quarter, expecting “a much-improved market,” including on the demand side.

On Sunday, Goldman Sachs started the investment banks’ upgrades of oil price forecasts, expecting Brent Crude prices to hit $75 a barrel in the third quarter this year, on the back of faster market rebalancing, lower expected inventories, and traders hedging against inflation.

But those forecasts all pale in comparison to Azerbaijan’s Socar Trading SA predicts global benchmark Brent could hit triple digits in the next 18 to 24 months, and Bank of America sees potential spikes above $100 over the next few years on improving fundamentals and global stimulus.

And, even with the WTI curve deep in backwardation… 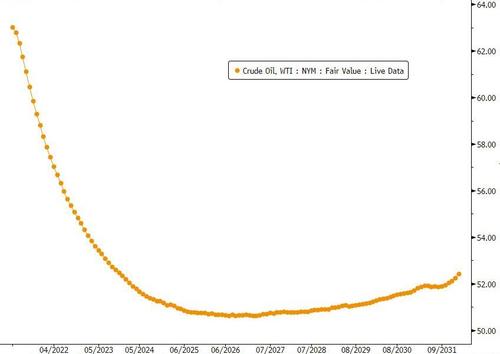 Bloomberg reports, speculators are also getting in on the action, increasing bets in the options market that oil will reach the vaunted level by December 2022.

As the chart below shows, the open interest in these $100 strike Dec 2022 calls has exploded higher since the turmoil in the Texas energy markets. 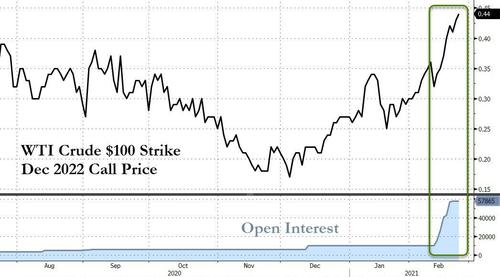 However, as Bloomberg notes, these forecasts for $100 are far from the current consensus. The median analyst forecast compiled by Bloomberg has Brent staying below $65 a barrel through 2025. And there are plenty of reasons to be skeptical of such a resurgence. For one, the OPEC cuts that have limited supply are artificial, and the cartel has enough spare capacity to meet any shortfall should demand rocket following a worldwide recovery from the pandemic, according to Bloomberg Intelligence.