In a hugely significant move that will put Russia-Europe relations further on edge amid an ongoing build-up of NATO forces along sensitive border regions, the large contingent of Marines that arrived in Norway last month are now expected to stay for an indefinite period.

“About 1,000 Marines who arrived in Norway last month — only to have their military exercises canceled due to the pandemic — will remain in the country for arctic training,” Military.com reports based on Marine Corps statements. 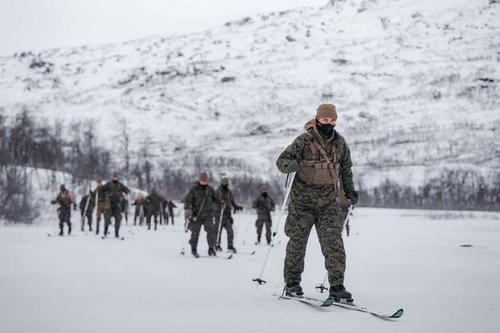 They plan to stay and engage in “valuable arctic and mountain warfare training” through at least the springtime. The deployed units are mostly from the 3rd Battalion, 6th Marines but will now essentially “stay put”.

Marines have been training on a rotational basis in Norway for years, but the reality is their stays and rotations have been increasingly extended over the past years. Moscow has meanwhile condemned a ‘Cold War’ style build-up near the Arctic Circle, where it also frequently conducts military exercises.

The AFP wrote that Russia is “fuming”, citing a Russian ambassador to say—

“Nobody in the Arctic is preparing for an armed conflict. However, there are signs of mounting tension and military escalation,”  Russia’s ambassador to the Arctic Council, Nikolai Korchunov, said.

The current militarization in the region “could turn us back decades to the days of the Cold War,” he told Russia’s RIA news agency in early February.

As we described earlier this month, the US Air Force for the first time ever sent multiple B-1 Lancer bombers along with 200 airmen to Norway, which came amid greater NATO calls to “confront Russia”.

And now just days ago, Forbes detailed that in response “the Russian air force is mobilizing its own warplanes. Fighters to intercept the B-1. And bombers to strike back.”

After the U.S. Air Force announced the B-1 deployment, the Russian air force wasted no time sortieing its own bombers. Two of the service’s Tu-160 heavy bombers flew an epic, 12-hour sweep of Northern Europe, the Kremlin announced on Feb. 9.

The 6,000-mile round-trip took the swing-wing Tu-160s from their base at Engels in western Russia north to the Arctic Ocean then west to Svalbard, south into the Norwegian Sea, east along the Norwegian coast and finally south back to Engels.

A pair of MiG-31 interceptors flying from Rogachevo air base in northern Russian briefly escorted the bombers as they roared across the Kara Sea toward the Arctic.

And not helping this Cold War style throwback, President Biden on Friday warned a global audience of Russian “bullying” and “autocracy”.

The US deploys long-range B-1 bombers to Norway to train in the strategically important High North in a new show of force unseen in the region since the Cold Warhttps://t.co/bWh35OxKA1 pic.twitter.com/4moPgA83qy

“The trans-Atlantic alliance is back,” he said before the Munich Security Conference in words intended to restore trust from European allies in NATO.

How To Trade The Coming Taper Tantrum