When we advised readers to brace for a “blockbuster” 10Y auction just before noon, little did we know that the post alone would spark a buying frenzy, that sent the 10Y yield from above 1.54% to just below 1.51% ahead of the 1pm auction, actually pushing the yield to red on the day after blowing out earlier as high as 1.565% 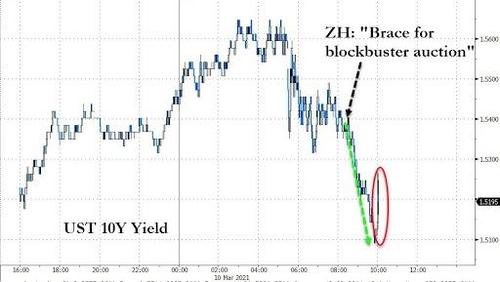 So fast forward to 1pm when moments ago the Treasury sold 10Y paper at a high yield of 1.523%, well below where the 10Y traded when we said to brace for a blockbuster auction, but 1 basis point above the 1.513% When Issued which was crushed lower – eliminating any concessions – thanks to our earlier post.

In other words, what we had expected would take place at the auction, took place just ahead of it.

That doesn’t change the fact that the 10Y auction was indeed very superb, and not even remotely similar to the catastrophic Feb 25 7-Year auction. Consider: 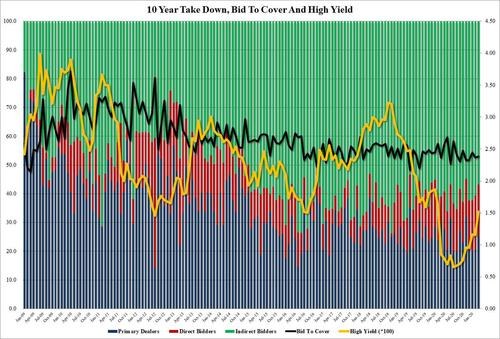 Overall, this was a superb auction relative to expectations, and very strong relative to recent performance, and in any event the strength of the auction was enough to push the 10Y yield to fresh lower after the modest tail on auction was announced, confirming that this indeed was a “stellar” auction… 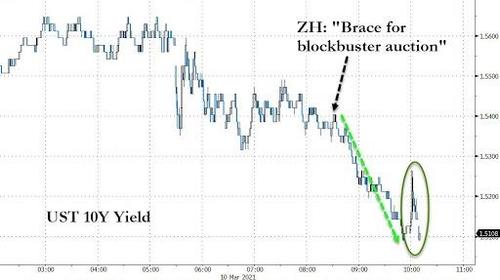 … although for the final verdict wait until tomorrow’s 30Y, which however we are confident will be absorbed without a glitch.