After the Pandemic Crisis lows last March, we routinely reviewed what we called the “2009 Playbook”. This compared the S&P 500’s performance after the March 9th, 2009 lows to its move higher after the March 23rd, 2020 lows.

This approach worked well, as the chart below highlights. When 2020 (orange line) ran out ahead of the 2009 experience (blue line), it invariably pulled back. And when 2020 occasionally lost some of its courage, it wasn’t long before it found it once again and returned to the 2010 pathway.

The chart below is flashing a warning sign just now, so let’s talk about it: 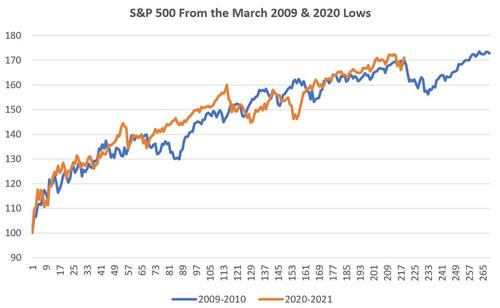 Takeaway: this isn’t so much a trading call as an illustration of what happens as we get deeper into a cyclical recovery. The chart shows 2020 diverged from the 2009 path several times, and 2021 might well do the same. But with so many market observers looking for a trading pullback, what we’re now calling the “2009 – 2010 Playbook” offers productive guidance on what to expect and where to start buying.

Five Ways In Which The EU Mismanaged Vaccine Policy

“Tesla Is Not A Competitor At All”: Waymo CEO Slams Tesla’s Self-Driving Efforts In New Interview