2020 Is The Worst Year For Contrarians Ever

Contrarian trades are where the big money is. Investors who hold their nerve and are greedy when everyone else is fearful, and vice versa, can make huge bucks. The nature of the market, and its tendency to overshoot, more or less guarantees this.

But while the market is unquestionably inclined to go to unjustified extremes and overshoot, the problem for a contrarian strategy is that most of the time the market by and large gets it right. This means that a strategy of mechanically betting against the market’s most extreme positions tends not to work — even though it occasionally works spectacularly.

And 2020 turns out to have been a terrible year for contrarians. This might seem strange, as virtually all 12 months were dominated by a novel coronavirus that scarcely anyone outside China had heard of at the year’s beginning. But the virus did not turn things around — it merely added speed to trends that were already in place.

For evidence, I will refer to the annual exercise conducted by Rob Buckland, chief global equity strategist for Citigroup Inc. in London. He refers to it as the “Christmas lunch hedge fund” — the strategy that would result if stocks were picked over a boozy Christmas lunch in which traders get ever more outrageous in their attempts to shock their colleagues with predictions of which stocks will do best next year. To track such a contrarian strategy, Buckland regularly takes the top and bottom 10 performing stocks each year, and looks at how reversing them would have fared the next year — going “long” the 10 worst performers, and “short” the 10 best. This year was the worst on record: 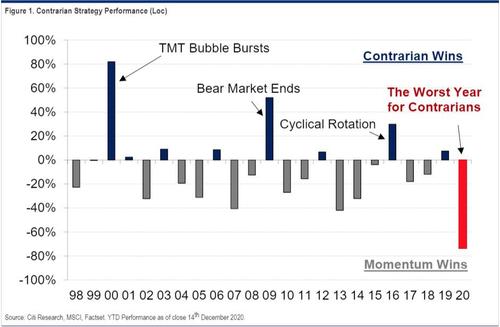 This was mainly because oil companies had a bad year in 2019, so contrarians would have bet on them to bounce back — a trade that went disastrously wrong. Meanwhile, contrarians also placed a short on technology stocks, which has become almost an annual occurrence. Again, it didn’t work out:

The virus proved to be a capricious guide to market returns. Last year’s bottom 10 among the 250 largest stocks in MSCI’s all-world index, which Buckland used for the exercise, included two stocks that might have seemed certain to do well out of the pandemic. And yet Pfizer Inc., which won the race to produce the first approved vaccine against Covid-19, lagged the market with a gain of only 6%, while Walgreens Boots Alliance Inc., a huge chain of pharmacies, logged a serious loss.

Judged by sectors, the very different years of 2019 and 2020 look close to identical when it comes to relative sectoral performance. This terminal screen shot shows how the 11 main industrial sectors performed in 2019, according to MSCI.

And this is the same league table for 2020 so far. Technology again leads, and energy still lags:

In terms of the critical information for sectoral allocation, the two years were not so different. When growth is perceived to be scarce, as was the case both this year and last, investors will pay more for the few stocks they think can provide it — led by the big internet names. Meanwhile, weak global demand was bad for oil majors, and created growing difficulties for the cohesion of the OPEC oil cartel, which came to a head this year. Anyone who placed a long energy/short technology trade among stocks in the S&P 500 Index would as a result have been seriously aggrieved: 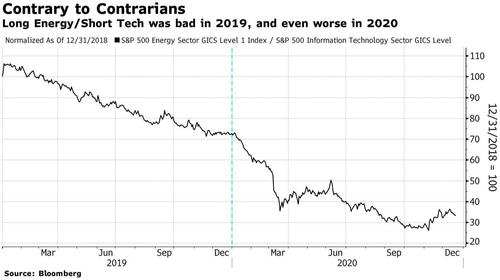 Two important messages arise out of the experience. The first is that momentum is such a strong force in markets that on balance it counteracts contrarianism. The winners do continue to win while the laggards keep lagging. To quote Buckland:

While we all like to think of ourselves as contrarians, the simple point is that this strategy doesn’t work. You might not be very interesting company, but you would win the Christmas lunch competition more often by making momentum calls. The big payout years for contrarians, like 2000 when the Tech bubble burst, are not enough to make up for the more frequent years when they lose. And in some years (like 2020), they can lose really big. If we look at cumulative performance, the global Contrarian Stock-Picking strategy would be down 97% since 1997. The Christmas lunch hedge fund would have been shut down many years ago.

This is his chart on how the contrarian stock-picking strategy would have done since 1997: 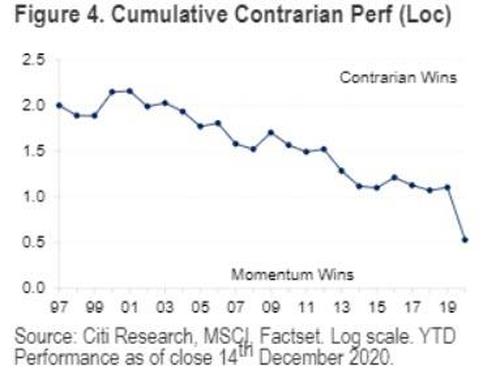 The takeaway? We should be on the lookout for great contrarian trades, because they can make a lot of money; but we should not seek out contrarianism for the sake of it, as that is a recipe to lose money.

A second point concerns the world that is being created by successive years of out-performance by tech and under-performance by oil majors. These trends tend to overlap with the aims of “ESG” (environmental, social and governance) investing, which is currently very popular. Investing in companies with relatively light carbon footprints will generally also lead to portfolios with lots of tech and no oil companies.

As Dec Mullarkey, managing director of SLC Management, put it to me in an e-mail, a strategy of going long on the S&P Information Technology Index (+39.8%) while shorting the S&P 500 Energy Index (-35.7%) has done very well so far this year. “This trade, at modest levels, is embedded in most ESG mandates. And this could persist well into 2021 as value buyers seem tepid on fossil fuels while ESG continues to grow its asset base.” 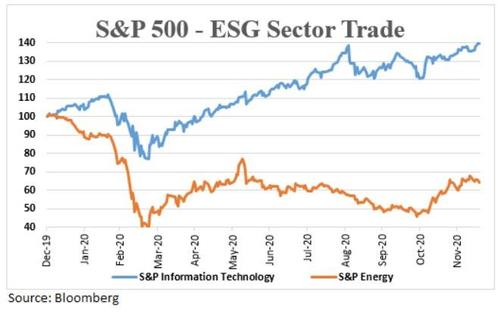 This raises the issue that many people being drawn into ESG at present are, whether or not they realize it, chasing the great recent returns that come with being long technology and short oil. Their commitment to the cause may yet be put to the test. And there is a deeper issue of whether ESG investing gets the results we want. Investing in less pollution-causing companies also tends to involve investing in less labor-intensive companies. This implies that ESG dollars may, at the margin, be going toward creating an economy with ever fewer jobs. The momentum in the stock market is only speeding this development along.

One final point of concern is that the contrarians should still be right a little more often than they have been in the last decade. The following chart shows the performance of the MSCI World Momentum index relative to its plain-vanilla World index, going back 25 years. Significant pullbacks used to occur quite often — as after the tech boom, and again after the global financial crisis. But momentum has not suffered a drawdown of even as much as 10% compared to the market since 2008:

Markets have grown more institutionalized over the years, with index funds mechanically designed to accept current prices, and not make any contrarian moves. Central banks are also much more concerned to maintain momentum, and to thwart the contrarians, than they used to be. Betting that these trends would fail this year would, it turns out, have lost you a lot of money. People will be understandably reluctant to make a contrarian bet again.

At some point the contrarians will be proved right. When that happens, the embedded returns of so many years of successful momentum could make for a lot of room below — and the boozy contrarian at Rob Buckland’s Christmas party will at last have something to be smug about.