2021 Is The Year That The Turds Hit The Pavement

Over the past few quarters, I have written about various Event-Driven set-ups. This is because mismatches between buyers and sellers cluster around these events and drive share prices. If you’re waiting for fundamentals to matter, you may eventually be proven right, but you had better be willing to wait. Event-Driven situations are immediate.

Why have Event-Driven moves become so much more accentuated lately? I think it’s a combination of the increasing dominance of passive over active, leading to less liquidity in the markets—while passive vehicles try and move increasingly larger blocks of stock anyway. This is then accentuated by retail traders who have literally no idea what they’re doing.

Let me tell you a quick story. It was early 2000. I took some money I saved from cleaning pools over the summer and tried to figure out the markets. I knew enough to know that the internet bubble was fake, but I was on the wrong side of the trade—my summer earnings were slowly melting away. Then, I came across stock un-locks.

The un-lock is the magic date when restricted shareholders (mostly VCs) can finally sell their restricted shares. Remember 2000? These were mostly worthless internet companies. The VCs didn’t care about getting the best price. They simply wanted out. Their cost basis was in the pennies and they were getting hundreds of times that price. These companies would simply cascade in the week after the un-lock as the insiders smacked every bid. All you had to do was read the filing, find the date (usually 180 days after the IPO) and short it a few days before the un-lock. Over the next half-year, I turned a few thousand dollars into a few hundred thousand—I was 19 at the time. It was enough of a grubstake that I was able to then focus on stocks instead of college. The rest is history. As a result, I’ve always had a sweet spot for un-locks.

Returning to the present—nothing has changed. When the VCs can sell something worthless, they’ll blast away, as fast as possible. Let’s look at a hilarious example. 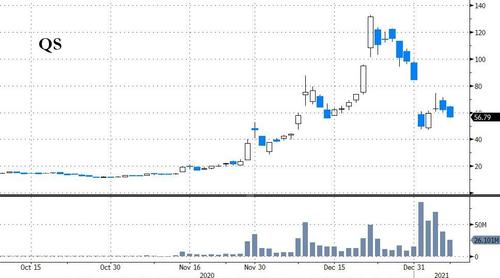 QuantumScape (QS – USA) is the definition of worthless—oddly, during 2020, that was a solid bull thesis. Venture capitalists are always running the same playbook. List a company with a tight float and manipulate the shares higher (yeah, I know, it’s a SPAC instead of an IPO, but same strategy). Then, when the shares are nice and high, dump into brainless retail bagholders who think they’re getting a bargain. If you want to dump huge blocks of stock, you need to accept a discount. If QS were at $10, maybe they could get out at $5. Instead, by running it up to $130, they’ve dumped huge size in the $50s. Great trade!! 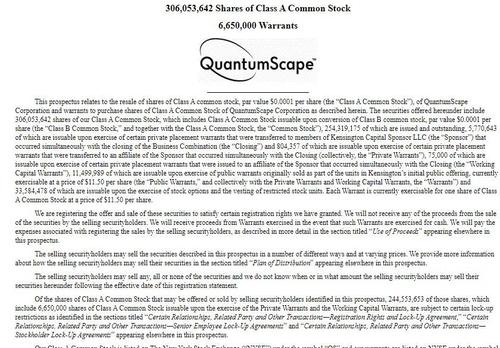 Now here’s the hilarious part. This was all telegraphed. All you had to do was read the damn SEC filing. You can tell that no one did, because the shares wouldn’t have gone all the way to $130, before dropping by more than half in a week.  I’m not talking about a small company either—this one is in the tens of billions.

When you see that cross your Bloomberg, “Bombs Away!!!”

Of course, if they’re going to scheme the market higher and dump stock, they’re not going to make it easy for you. Gone are the days when you can simply count 180 days from the IPO. Read this from Snowflake (SNOW – USA).

“Beginning on the 91st day after the date of this prospectus, our current employees with a title below vice president, current contractors, former employees (other than Robert L. Muglia, our former chief executive officer, and his affiliates), and former contractors, may sell a number of shares equal to 25% of their Vested Holdings. Beginning on the second trading day immediately following the day that the closing price of our Class A common stock on The New York Stock Exchange exceeds 133% of the initial public offering price as set forth on the cover page of this prospectus, for at least 10 trading days in the 15 trading day period following the 90th day after the date of this prospectus, all other

nonemployee stockholders who are not members of our board of directors or our affiliates and whose shares were not included in the First Release (including Mr. Muglia and his affiliates), may sell a number of shares equal to 25% of their Vested Holdings. We will report such release on a current report on Form 8-K following the closing of trading on the date that is at least two trading days prior to such release.”

You got all that? Yeah, they don’t want you selling before the un-lock. They certainly don’t want you shorting into it. It’s meant to be tricky and not fit cleanly into an excel sheet. In finance, everything takes some leg-work. If you can find a company valued like the GDP of a small nation, moving dramatically (and predictably) over the course of a week or two, it pays to be involved.

2020 was the year of the Event-Driven trade to the upside. 2021 is the year that turds hit the pavement. You ought to be watching for un-locks. A whole lot of questionable 2020 issuances are about to experience a waterfall of selling.

This Week in the New Normal #8