As it continues to lead Europe (and trail the UK) in the race to vaccinate its population, the US has notched yet another milestone in the battle against COVID-19: a record 2.9MM vaccine jabs were doled within 24 hours on Saturday, the largest daily tally yet. However, some experts, including Dr. Anthony Fauci, are worried about the possibility of a “fourth wave” of COVID infections, potentially driven by “mutant” strains, which comprise a growing share of new infections.

Over the past week, the average daily number of new doses in the US has been 2.2MM doses/day, the highest 7-day average yet, according to Bloomberg.

Globally, the US is on track to become the second developed western nation to see its total vaccines administered eclipse more than 30% of its population, a milestone first achieved by the UK. Meanwhile, more than 17% of Americans have received both vaccine shots. 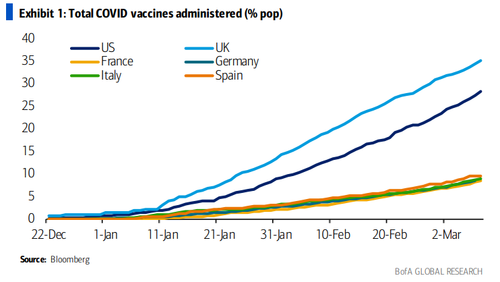 Following a brief uptick last week that stoked worries about a possible plateau, the number of new daily cases reported in the US is moving lower once again, with the daily average returning to levels unseen since October on Sunday. Total US COVID hospitalizations have fallen to 40.2K, which, like cases, is at the lowest level since October. Hospitalizations have fallen 70% from their peak in late January, less than 2 months ago. New cases have fallen by roughly the same level.

In total, the US is on the cusp of reaching 29MM total COVID cases, while the global tally nears 117MM. 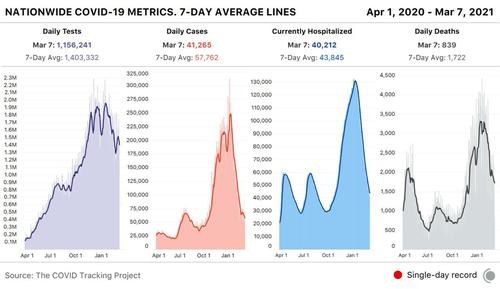 Some 107MM doses of the three FDA-approved vaccines have been shipped to states across the US, per the CDC.

All of this vaccine optimism has led Goldman Sachs’ analysts to project that most advanced economies will pass the 70% threshold for herd immunity by early Q3, even as Europe lags the US and UK, and European Commission Chairwoman Ursula von der Leyen insists that the bloc is tired of being scapegoated for its slow vaccine rollout.

Deaths have slowed, too, but not nearly as quickly as new cases. As the number of patients hospitalized with COVID across the US has dropped sharply, another 839 new deaths were reported across the US yesterday, roughly even with levels from late last year.

But while the immunization outlook appears bright, some experts are still worried that COVID mutations and human complacency may conspire to usher in a “fourth wave” of the virus later this year. While cases continue to drop, Dr. Anthony Fauci has continued to criticize states that have decided to lift restrictions “prematurely” (according to the CDC), warning that the growing prevalence of the mutated strain of COVID first detected in the UK could cause a resurgence in new cases. Late last week, Dr. Fauci warned that “when you have that much of viral activity in a plateau, it almost invariably means that you are at risk for another spike.”

Gov. Cuomo announced over the weekend that NY restaurants (outside of NYC) can soon reopen dining rooms to 75% capacity. And earlier Monday morning, the New York Times reported that NYC will start welcoming high school students back to classrooms on March 22. NYC’s school system, by far the largest in the country, has more than 1MM students enrolled, with nearly 300K students in high school. 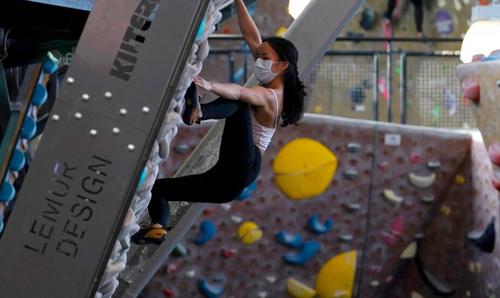 According to the plan, which is expected to be formally announced by Mayor de Blasio on Monday, roughly half of the city’s 488 high schools will offer full-time instruction to most, or all, of in-person students (i.e. students who opted last year to return to classrooms as quickly as possible), while the other half will offer hybrid instruction. The city will also restart high school sports for all students, including those who have opted to continue learning remotely. The sports season will run through the summer this year, rather than ending with the school year. Student-athletes will be required to wear masks at all times.

Even with the return of as many as 55K high school students who signed up for in-person classes last fall, only about a third of all city students will be receiving any in-person instruction. The remaining 700K students in the city system have chosen to continue receiving instruction remotely, in large part because of lingering concerns about the health risks.

As more states push forward with reopening measures (even California is loosening some restrictions, while Texas has led the charge to drop all restrictions), Dr. Fauci isn’t the only high-profile public health official warning about a potential “fourth wave” of the virus. Writing in a WSJ editorial published online last night, Dr. Scott Gottlieb warned that mutant strains of the virus could cause a resurgence of hospitalizations and deaths if the country isn’t careful.  Even if cases continue to fall through the summer, the presence of the new COVID variants threatens a resurgence in the fall and winter, once the traditional “flu season” risks becoming “COVID season”. “The path to normalcy won’t be linear. As summer approaches, things will likely loosen up, but we may need to reinstate stricter precautions in the fall or winter. Not everyone will choose to get vaccinated, and new variants may leave more of us vulnerable,” Gottlieb wrote.

‘The Centralization of Power Always Fails’