75% Of All Jobs Added In February Were Waiters And Bartenders

Call it payback for the December restaurant shutdowns.

It took a few minutes after the BLS reported the impressive February jobs report, which showed a whopping 379K total jobs added in February (and 465K private payrolls, or more than double the 195K expected), for traders to read between the lines and realize that there was much less than meets the eye in the latest jobs report.

To wit: of the 379K jobs, a whopping 355K, or 93%, were in leisure and hospitality, and within this category the one and only sector that truly boomed the most under the Obama admin was on top: employees food service and drinking places, i.e. waiter and bartenders, accounted for a massive 286K jobs, or 75% of the total job gains in February. Call it payback for the December collapse in restaurant workers when nearly 400K jobs were lost amid the latest round of restaurant shutdowns. 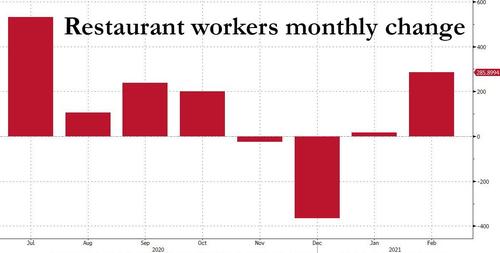 To be sure, a rebound in restaurant jobs was to be expected. Recall that in our preview of today’s number we quoted Goldman which said that “infection rates fell and the severity of business restrictions generally eased” in February, and “reflecting this, restaurant seatings on OpenTable rebounded modestly further to -56% from -59% (yoy survey week to survey week).” It appears that the rebound was far stronger than even Goldman had expected.

Commenting on the surge in leisure jobs, South Bay research writes that “the surge in Leisiure & Hospitality payrolls reflects rising Consumer spending in the face of bad snowstorms and continued COVID restrictions. Imagine what will happen when those brakes are let off.“

Imagine indeed: as Renaissance Macro analyst Neil Dutta said, “With COVID cases moderating, employment growth is picking up in high touch service industries. As the vaccination campaign goes on, we will see cases continue to drop and people going out and doing things. This will lead to a boom in the economy, service industries especially. We are going to see a seven figure jobs number at some point in the next few months. Bank on it.”

Besides waiters and bartenders, employment also rose in  accommodation (+36K) and in amusements, gambling, and recreation (+33K) as more of America reopened.

As SouthBay notes, as an indicator of Private Sector labor demand, Temporary services provide critical insight.  In particular, Temp staffing reflects near-term business activity and expectations. The Temp hiring trend downshifted in November with COVID’s 2nd wave and consequent re-imposition of lockdown.  It will rebound again when restrictions are lifted in the Spring. Another factor to consider is that the pace of recovery was bound to slow as full recovery approaches.  After collapsing 1M in March & April, Temp payrolls have rebounded 823K.

Here is a breakdown of all job sectors and how they performed in March: 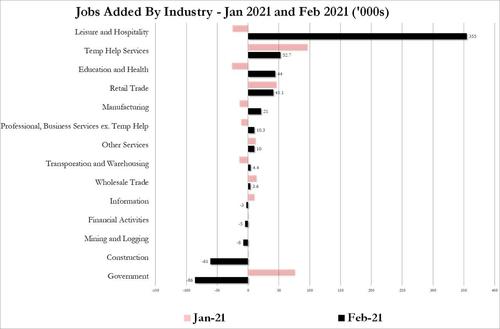 Finally, courtesy of Bloomberg, here are the industries with the highest and lowest rates of employment growth for the most recent month.

Rabobank: The Choice We Face Is This: Does One Go Long, Or Go Shortages