Another woman has accused NY Gov. Andrew Cuomo of sexual improprieties, including a forcible kiss on the lips, marking the second woman who has accused Cuomo of such a transgression. And what’s more, the accuser, named Sherry Vill, has proof.

The 55-year-old accuser said Cuomo grabbed her face and kissed her on the cheek in front of her home in 2017. She described the kiss as an “inappropriate sexual gesture.”

“I know the difference between an innocent gesture and a sexual one,” Vill said during a virtual press conference. “I never felt as uncomfortable as I did the day Governor Cuomo came to my house. His actions were very overly sexual, highly inappropriate and disrespectful to me and my family.”

She said Cuomo told her she was beautiful and acted in a “highly flirtatious and inappropriate manner.”

Vill, who was married at the time of the alleged incident, said Cuomo visited her home in Greece, NY, to survey flood damage, according to her attorney, noted feminist #MeToo champion Gloria Allred.

Allred said during a press conference that she would be contacting the state AG’s office to volunteer her client’s cooperation with the investigation into allegations of sexual harassment by Cuomo.

Afterward, Cuomo tried to brush off the inappropriate contact as something that was normal. “He said that’s what Italians do, kiss both cheeks,” Vill said.

Vill’s daughter apparently took a photo of the incident and shared it on social media at the time. That marks the second photo of Cuomo delivering an ungainly kiss to an unsuspecting woman. 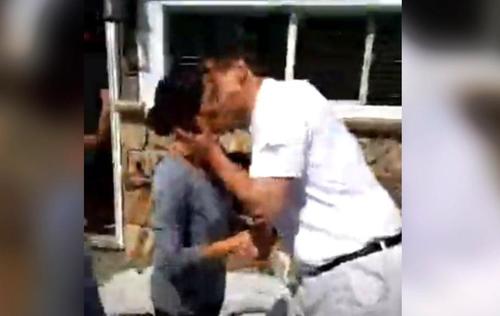 The governor has insisted that he never forcibly touched a woman who didn’t want to be touched.

Meanwhile, the Washington Post reported new details yesterday of Cuomo’s abuse of office by using state resources to fast-track COVID testing for friends and family members. Sometimes, the governor would go as far as to ask state workers to personally travel to the homes of family members and test them.

One such example of this was when Chris Cuomo, the governor’s CNN anchor brother, was sick with the virus last spring. Cuomo reportedly received several hours-long visits from a state public health official and doctor, according to WaPo.

And a top state physician whose pandemic portfolio involved coordinating testing in nursing homes was dispatched multiple times to the Hamptons home of CNN host Chris Cuomo, the governor’s brother, in testing visits that sometimes stretched hours, according to two people with knowledge of the consultations.

No fewer than seven anonymous sources told WaPo that insiders including fashion designer Kenneth Cole (the governor’s brother in law) were allowed to cut the line for scarce tests. They told WaPo that they were heavily pressured to meet Cuomo’s demands, and even developed a special designation for priority individuals demanded by the governor.

But people familiar with the efforts said they were also told to treat individuals differently because of their connections to the governor. The individuals — who spoke at length to The Washington Post on the condition of anonymity out of fear of retribution by Cuomo’s office — described the behind-the-scenes operations and their feelings of discomfort with a system that they believed at times prioritized political connections over medical need.

During the early frenetic weeks in March 2020, officials working at testing sites rapidly assembled a system that gave special treatment to people described by staff as “priorities,” “specials,” “inner circle” or “criticals,” according to five people, including three nurses, who described how resources were redirected to serve those close to the governor and other cases that were fast-tracked.

At one of the first pandemic operations hubs in the state, the testing priority status of more than 100 individuals were logged in an electronic data sheet that was kept separate from a database for the general public, according to a person with direct knowledge of the practice.

The NY Department of Public Health denied accusations of preferential treatment. Yesterday, Cuomo announced that he would lower the minimum vaccination age to 30 as he continues to push his plans to reopen the Empire State, despite warnings from Dr. Anthony Fauci and other federal officials that states need to take it easy.

BofA: The Uber-Dovish Fed Backfired And Vigilantes Are Now Bullying Powell Into YCC – Three Ways To Trade This