There’s a growing risk of the dollar correcting higher. The nominal yield advantage of the U.S. has steadily increased relative to other G-10 currencies in recent months, accelerated by the expectations of further government spending now that the Democrats control Congress and White House.

The yield difference between the U.S. and Germany has increased to the highest since the U.S. lockdowns in March. Even China’s yield advantage versus the U.S. is narrowing. 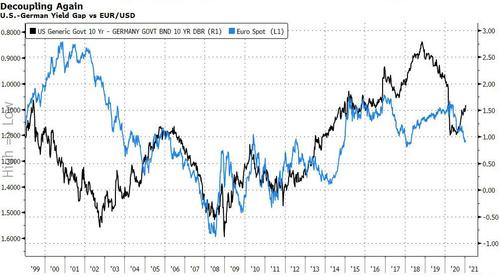 Rate differentials haven’t been a prominent driver for exchange rates lately, but if more spending leads to U.S. economic outperformance, the dollar could move to the right side of the “smile curve,” where stronger growth means a higher dollar.

To finance the twin U.S. deficits, foreign investors need to be compensated either by higher yields or a weaker dollar. The former reduces the need for the latter.

A weaker dollar is part of the reflation trade that has benefited everything from equities to commodities. A corrective move in the dollar could spoil the party.