“A Fantastically Unusual Thing Happened”: For The First Time Ever, IB Clients Are Net Short The Market

Yesterday morning, SocGen’s Albert Edwards asked when referring to a recent MarketWatch article, if he was “the last bear left in the markets” adding that “surely I am not now all alone, howling to myself on the icy Christmas tundra?!”

It’s concerning that the author of this @MarketWatch opinion piece, Brett Anders describes me as “possibly the last bear left in the markets”.

Surely I am not now all alone, howling to myself on the icy Christmas tundra?! https://t.co/IWy1euXawK

Our response to Edwards – that he may well in fact be the last bear standing –  was to show a recent Goldman chart we published at the start of the month, which demonstrated the record drop in S&P short interest “as any remaining bears have been ritualistically slaughtered in the last few months”, something we first discussed last month in “Hedge Funds Go “All-In” As Bears Go Extinct: Shorts Drop To Record Lows.“ 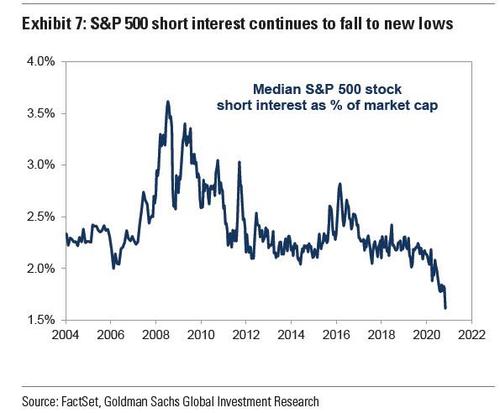 Not that the extinction of bears is in itself bearish: quite the contrary – as JPMorgan explained (see “Crowded Trades And Euphoric Consensus Are The Biggest Threats For Markets“), it is one of the oldest contrarian signals in the “book”, although to be fair there has never before been a book when the Fed would step in any time there is even a modest market correction to bail out 12-year-old trading veterans and various straight to CNBC money managers whose only “strategy” is to buy and hold everything, confident the Fed will always bail them out.

So in the context of this unprecedented bullish euphoria which has now surpassed the mania of the dot com bubble, there has been yet another unprecedented response by market professionals whose returns this year have been crushed by teenagers… 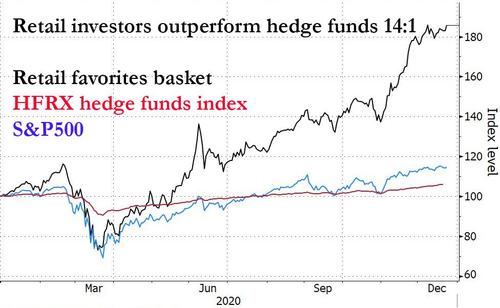 … and various other new market entrants to whom Powell and his money firehose now directly caters.

… who have been snapping up record amount of out of the money calls on names like Tesla, and the FAAMGs, in the process creating a positive gamma feedback loops, and sending the price of stocks higher, leading to even more OTM call purchases and so on.

What Peterffy said was remarkable: “A fantastically unusual thing happened among our customers about a week ago” the Hungarian head of Interactive Brokers said.

“Our customers are traditionally long the market. A week ago it has changed: our customers tend to be on the selling side of options and there is such demand for out of the money options that our customers became sellers so they overwrite their long position in stocks, and it’s usually about Tesla, Amazon and Apple – that’s where most of the action seems to be.”

“So the Robinhood folks are long these options, and IB customers are short these options. It’s a very interesting situation, it has never happened in our history that our customers as a whole were net short the market. But as of yesterday. that is the case.”

In short, we are now witnessing a historic clash where the relentlessly euphoric Robinhood bullwagon has forced an entire brokerage catering to high net worth individuals and professionals – Interactive Brokers – to turn net short, in revulsion to the idiocy unleashed by the Fed and teenager traders.

Unfortunately, whereas any other time the outcome of this clash of generations and wealth buckets would have been all too obvious, the fact that the Fed now explicitly caters to idiots, CNBC talking heads and clueless BTFDers, means that it is completely unclear who the winner of this clash will be. To be sure, judging by the 14x outperformance of retail traders vs hedge funds, one can argue that the Robinhood juggernaut can continue indefinitely until such time as the Fed realizes the catastrophic consequences of what it has unleashed… which may well be never.

Peterffy’s full interview is below.

The Presumption of Liberty