A Grim Look At The Exploding US Budget Deficit

The non-partisan Congressional Budget Office paints a sorry picture of US government spending. 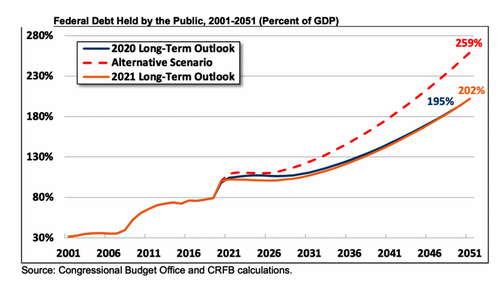 Debt Will Be Double the Size of the Economy by 2051

Actual debt levels could be higher than CBO projects. Under an alternative scenario that assumes lawmakers enact an additional $2 trillion of fiscal support in response to COVID-19 (similar to the American Rescue Plan), extend most expiring tax cuts, and grow annual appropriations with the economy instead of inflation, debt would total 259 percent of GDP by 2051. 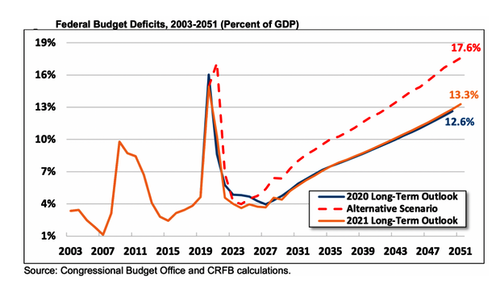 The CBO does not see and has not factored the next recession into any of these scenarios.

The projected long-term growth in spending is largely driven by rising health, interest, and retirement costs. CBO expects spending in these three areas to rise from 12.3 percent of GDP this year to 24.4 percent of GDP by 2051. Interest spending will be the largest federal program by 2045.

Read that last sentence again and again until this sinks in: How the heck is the Fed ever going to hike rates again?

We are on auto-pilot for a global currency crisis because the current path is not remotely sustainable.

But hey, rumor has it that climate change is the “existential threat” of our time, so much so that politicians seek $90 trillion solutions to the problems.

I assure you the world will still be here in 50 years even if the oceans do rise another 3 inches. But what about the value of the US dollar?

For discussion, please see Don’t Accept 100% of the Climate Change Story and You Get Labeled a Racist