First, we’d like to pat ourselves on the back a little.

While most of the US daytrading class is now in a furore over the “discovery” that most shorted stocks tend to outperform – to put it mildly – when a bunch of autists rams illiquid, heavily shorted names up the collective behind of hedge funds which “legally” collude during idea dinners to put on a basket of shorts, hence why stocks like GME can end up with a synthetic short that is higher than the entire float, none of this should be news to regular readers, as the theme of going long the most shorted names is one we first presented and discussed as far back as 2013:

We then reiterated this strategy in 2014…

It took banks about 6 years after our first post on this matter to admit we were right and that going long “the most shorteds” is not only the most profitable strategy but also the most successful one in the past decade; in Aug 2019 Bank of America showed that “buying the 10 most underweight stocks and selling the 10 most overweight stocks by active funds has generated alpha in the past years with the exception of 2017″... 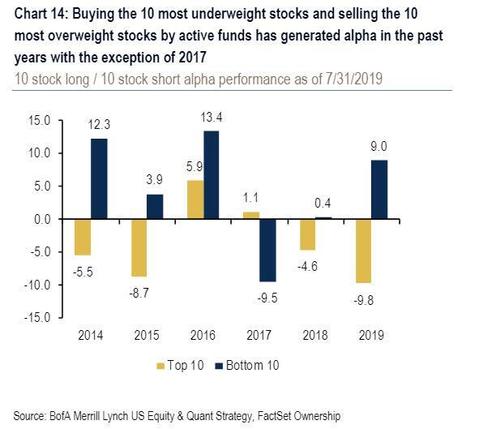 … as we laid out in Going Against The Wall Street Crowd Has Been The Most Profitable Strategy.

What is the point of all this? Simple: for all its tremendous success, r/WallStreetBets has not discovered anything that was not known long ago. It did however succeed in creating what has become the world’s biggest daytrading army which, most importantly, is well organized and works as a collective “hive mind.” And, at 6 million users strong, or up a record 2 million users in the past 24 hours… 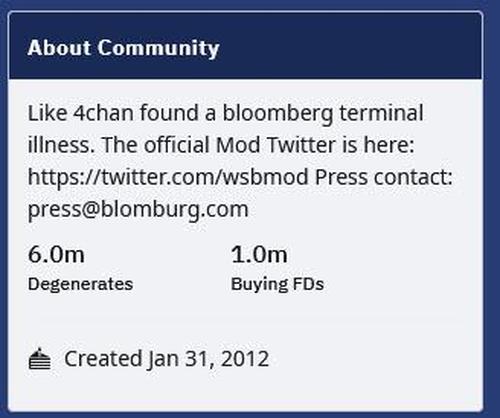 … r/WallStreetBets is now the world’s largest decentralized hedge fund, and woe to any billionaire or respected asset manager who stands in its way (as Gabe Plotkin found out the hard way in just 24 hours).

With that said, and well before this week’s short squeeze insanity, last Friday when all eyes were only on Gamestop which soared after short seller Andrew Left conceded in his feud with redditors, which sent the company soaring we had some advice for our readers who were despondent that they had missed last Friday’s GME “surge” from $43 to $65: not only are much higher prices coming (clearly with the stock trading at $300 now that was correct), but we also published a list of the most shorted Russell 3000 (small cap) stocks which due to their illiquidity would be most susceptible to squeezes. Those names, which we summarized in this post, as we now know are the companies which one week later have absolutely exploded as rolling short squeezes have crushed the hedge fund industry, forcing it to cover, and have quickly become the best trading strategy.

Don’t believe us? Last Friday we put together an index tracking the base of the Top 10 shorts. The basket is up more than 3x in one week! 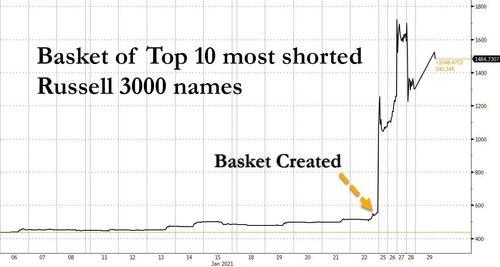 To be honest, it didn’t take rocket surgery to figure this out: we merely consolidated our observations over the year past decade regarding most shorted stocks, and combined them with the realization that there is now a credible force – in the face of r/wallstreetbets – that has the capacity to ramp up said names. We then merely extended the logic that applied to GME to other heavily shorted and mostly illiquid names.

Just as we expected, the results were fascinating (and lucrative). What we did not expect was for banks to piggyback on this effort and to publish their own screens of most shorted stocks – after all, doing so could directly harm their biggest clients, the same hedge funds that were short these stocks. After all, the last thing banks can afford is to lose their top customers just to demonstrate that they are smart.

And yet, one week later, one bank decided to break with the herd. In a note published overnight, Jefferies analyst Steven DeSanctis published a note titled “Hedge Fund Holdings: Attack on Shorts; Identifying Names That Could be Targeted” (which we assume was cleared by compliance), and which is set to burn countless bridges between Jefferies and its hedge fund clients that are long the names that Jefferies has identified as the next wave of short squeeze candidates.

This is what DeSanctis said:

“In football, targeting gets you ejected, while in today’s market, some cheer you on. The most heavily shorted stocks seeing widest gap in performance EVER in small caps, but we did see a big gap back in Apr. We have portfolios focused on shorts by Hedge Funds, also looking at the 5-heaviest shorts per sector. Besides short interest, we looked at sector wgt changes over time. Industrials continued to become more popular, while Tech relative wgt turned up.”

… the Robinhood and retail investors have been taking their aim at smaller-cap names that tend to lack liquidity. We looked at the net Long and Short portfolios that do not have much liquidity and could see more big moves in  these names.

Ok, but we last week we already listed the most likely small-cap, illiquid stocks with outsized short interest (which as we already know exploded higher). How exactly is Jefferies adding any value here?

First, the bank realizes that the most-heavily shorted companies are already in play, so instead it looks at the next tier – those companies with a SI of float in the 10-30% range, yet which are sufficiently small cap and illiquid to generate outsized returns one the WSB army rushes them. In short, the bar is getting lowered in terms of which companies are likely to be short squeezed.

Second, and in going back to our original observation from 2013, Jefferies decided that the most suitable trade here is not to go naked long the most shorted names, but to pair it with a short in the uber-crowded longs which are most likely to drop. We completely agree with this approach, especially since we have observed precisely such a bifurcation between the “most shorted” and “most popular/VIP” baskets in recent days.

Here are some further observations from DeSanctis:

Short portfolios are getting run over, while Uber Crowded, Popular in red: Looking across the six portfolios we track, we have seen the most-shorted names rise 13.4% this month and they’re up 157% from the low. In contrast, the Most Popular Longs by Hedge Funds are off by 4.9%, and the UBER Crowded names have slipped 5.6%. For those names that are owned by Long Only folks but Short by Hedge Funds, these stocks are up 9.6% and 110% from 3/18. This all comes on the back of the S&P 500 being basically flat.

Looking for shorts to trade, we offer a few selections on our menu: The data provided by our friends at MSCI allow us to build portfolios based on Net Short positions, those names that have gone from Long to Short. We also add a sprinkle of liquidity, or lack there of, along with biggest shorts by sector. The Margin Table gives you Net Short that are tougher to trade and could see more volatility, especially over the next several days/ weeks.

Ok, enough talk, let’s trade. What are the these most shorted names that Jefferies thinks will go up, and alterantively, which are the crowded longs that are set to tumble?

For all those readers who patiently read all of the crap above, here are just the shorts squeeze candidates laid out by Jefferies… 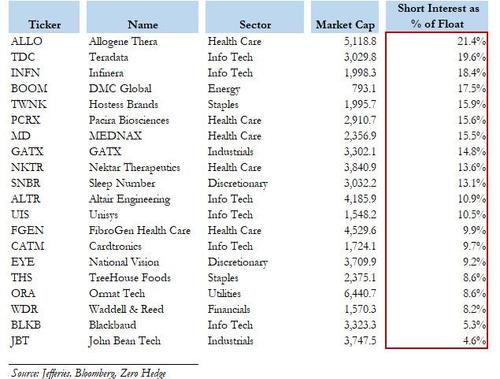 … and here is the full pair trade along with the longs likely to crack: 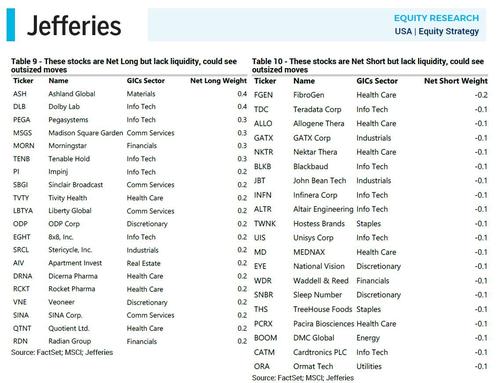