A “Very Surprised” JPMorgan Calculates The Damage From The Archegos Collapse

Unlike the devastating London Whale debacle in 2012, which was all JPMorgan eventually drawn and quartered quite theatrically before Congress (and was a clear explanation of how banks used Fed reserves to manipulate markets, something most market participants had no idea was possible), this time JPMorgan was nowhere to be found in the aftermath of the historic margin call that destroyed hedge fund Archegos. Which is may explain why JPMorgan bank analyst Kian Abouhossein admits he is quite “puzzled” by the recent fallout from the Archegos implosion (or maybe JPM simply was not a Prime Broker of the notorious Tiger cub), which however does not prevent him from trying to calculate the capital at risk from the Archegos collapse.

In a note published this morning, Kian writes after Nomura yesterday confirmed (at least) a $2Nn potential claim and fellow Japanese bank Mitsubishi UFJ Securities Holdings announcing today of another potential $300MM loss – which as the JPM strategist admits “for a likely non-material PB player is surprising to us” – JPMorgan now expects losses well beyond normal unwinding scenario for the industry: and explains that it now sees “the losses as very material in relation to lending exposure for a business that is mark-to-market and holds liquid collateral” and makes Nomura’s indication of potentially losing $2bn and press speculation of CSG $3-4bn losses “as not an unlikely outcome” according to the JPM strategist.

So why is JPM surprised?

Because as Abouhossein writes, “in normal circumstances… we would have suspected industry losses of $2.5-5bn. We now suspect losses in the range of $5-10bn.” In other words, JPM has doubled its max loss estimate to as much as $10BN, a number which could yet rise.

To get there, JPM estimates that Archegos was highly leveraged at 5-8x (i.e. $50-80bn of exposure for $10bn of equity) – using Total Return Swaps and Certificates for Difference to lever up so massively as we discussed yesterday – and it was this use of equity-swaps tha “tincreased the inability of PBs to see the concentration risk in holdings within the hedge fund in question.”

Even so, Kian admits that he remains “puzzled why Credit Suisse (CSG) and Nomura have been unable to unwind all their positions at this point – as we would expect to get an announcement as soon as this is the case, on the scale of potential losses (especially in the case of CSG which hasn’t provided numerical impact)” although we have gotten some headlines suggesting the total loss could be as big as $7 billion.

That said the JPM analyst expects full disclosure by the end of the week at the latest from CSG and would keep an eye on credit agencies statements as well. And in the harshest slam of JPM’s competitors, Kian says he suspects “potentially poor risk mgmt being an issue here considering i) late unwinding, and ii) possibly significant more leverage than for GS/MS similar exposures.”

Alternatively, one could argue that it was Goldman and Morgan Stanley who rushed to break ranks with the syndicate of Prime Brokers and started dumping blocks of Archegos shares for one reason or another on Friday morning as we detailed yesterday, which meant that while they suffered the least losses, those banks – like CS, Nomura and Wells – which were slow to start selling, would end up with the largest losses (for more see “How Goldman And Morgan Stanley Broke Ranks And Triggered The Biggest Margin Call Since Lehman“).

In terms of actual loss estimates with an empahsis on Credit Suisse which so far appears to be the hardest hit, here is a breakdown from JPMorgan of what is known:

In terms of capital at risk, based on press articles, Credit Suisse seems to have bigger issues than Nomura assuming press speculation of  $3-4bn are correct and Grensill could potentially lead to additional litigation cost of $1-3bn. In the case of Nomura, JPM has reduced the share buyback for FY2020 from ¥75 billion to ¥10 billion; if the press speculation losses are correct, it would expect CS at a minimum will have to cancel its share buyback for 2021, preserving the dividend and we assume no buyback for the next 2 years assuming Basel 4 implementation as of Jan 2023.

Assuming no RWA growth vs. YE2020 levels, JPM calculates that CS can absorb a max. one-time pre-tax hit of c$4.5bn (CHF 4.2bn) for Archegos which post-tax is 116bps of CET1 capital offset by 32bps of Retained earnings (1Q Net Income less 1Q dividend accrual of CHF 0.2bn and share buyback of CHF 0.3bn completed YTD) and still reach 12% by end of 1Q 21 which is seen as an acceptable level for S/Hs under Basel 3 – with further hits to come (see below). The minimum CET1 requirement is 10% and every additional $1bn pre-tax hit is 26bps of CET1 capital based on YE2020 RWAs and hence “any hits beyond $5bn pre-tax from Archegos will call into question the capital position in our view”, JPM warns. 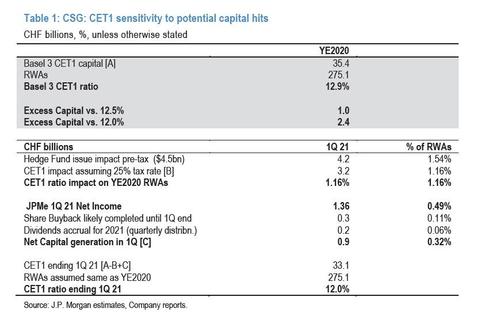 Separately, Bloomberg adds that March’s blowups may – in addition to wiping out more than a year of profits for the bank and threaten its stock buyback plans – also add add to the reputational hit from the other missteps by bank CEO Thomas Gottstein. With the shares posting the only decline among Europe’s major banks in 2021 and a new chairman starting next month, Chief Executive Officer Thomas Gottstein is facing questions over whether he and risk chief Lara Warner have a handle on the bank’s exposures.

“Risk control at every level in this bank must be examined and changes made where there are deficiencies,” David Herro, chief investment officer at Harris Associates, one of the biggest investors in the bank, said in an email. “But I state the obvious?”

As Bloomberg further notes, the hits from Archegos and Greensill have spoiled a plan by Gottstein to start the year with a clean slate.

The CEO late last year wrote down the value of the bank’s stake in hedge fund York Capital and took a hit related to a long-standing legal case into residential mortgage-backed securities, dealing the bank its first quarterly loss in three years. The crises have more than overshadowed its best start to the year in a decade.

“While all four events appear idiosyncratic in nature, it inevitably has led investors to question the strategic decision making at CS and the risk culture of the firm,” Andrew Coombs, a Citi bank analyst wrote Tuesday.

While Credit Suisse has not quantified the full damage yet, and has merely said that it faces “highly significant” losses tied to Archegos, Berenberg analysts pegged the hit at 3 billion Swiss francs, on top of 500 million francs from the Greensill issues.

Finally, JPM tries to answer a key question for many investors, namely what has happened with holdings (as speculated in the press ) of Archegos Capital?

As Kian writes, the share price of Arhcegos Capital linked stocks fell by -39% on avg. since the beginning of last week. According to press reports (Bloomberg), Archegos Capital was forced to sell large shareholdings in eight online and entertainment companies (GSX Techedu, ViacomCBS, Discovery, iQIYI, Tencent Music, Vipshop, Baidu, Farfetch) to cover potential losses after some positions moved against the fund. Once Archegos Captial failed to meet its margin commitments, the sell-off intensified further as banks started offloading via sizeable block trades the holdings posted by the fund as collateral, prompting more declines.

Based on the latest publicly available disclosure the banks with the largest exposure to the mentioned companies were Morgan Stanley, Credit Suisse, Goldman Sachs, Nomura and to a lesser extent UBS and DB (more details below). On Friday alone, both ViacomCBS and Discovery saw their largest ever daily decline, with each falling by more than -27%. Traded volumes for the eight companies peaked on Friday with daily volumes being on avg. more than 13x the 90 days moving average. The sell-off continued on Monday 29th with the aforementioned stocks falling further -6% on average. 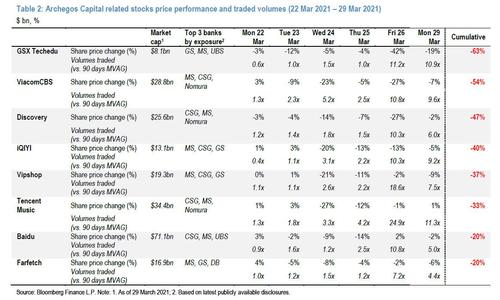 Finally, courtesy of JPM, here is a summary of all the latest publicly available information disclosing what exposure each bank may have had – and still has – to Archegos: 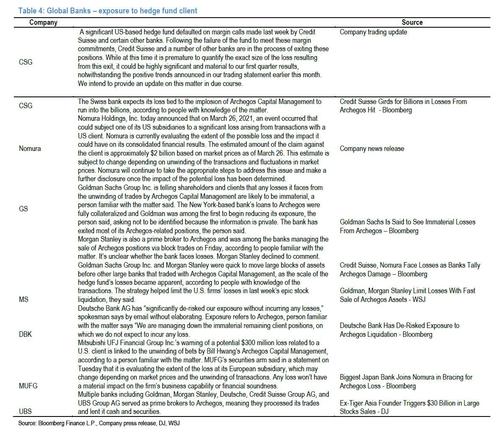