March 23, 2020. The day of the bottom and markets never looked back a few intermittent corrections aside. Central bankers have done it again: Print the world out of another crisis and they are basking in their own glory keen on continuing on a path of permanent intervention that appears to be consequence free. 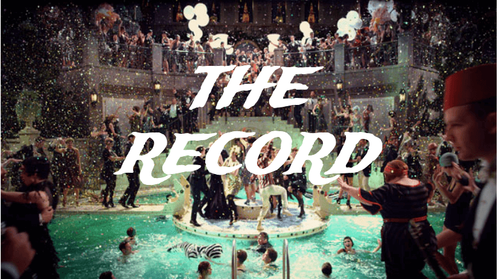 I remain a very lonely voice highlighting consequences that either appear to not matter or no one cares about. But I can’t help myself, I’m a reality junkie. I maintain that what we are witnessing is the direct result of a monetary intervention excess that comes with consequences that are currently all too gladly ignored by institutions, retail participants and central bankers themselves.

For the record is very clear on one consequence: Central banks have once again made the rich richer:

Continuing and exacerbating a trend that has really kicked off with the advent of permeant central bank interventions and reaching the perverse levels we see today:

“Man, Powell is such a hitter. He is relentless in his desire to help the underclass in this country. More than anyone. It’s truly incredible… and joyous!”

The sheer vastness of the wealth gap expansion is starting to get political attention but my sense is politicians are still shooting in the dark not understanding or pretending to understand who the real culprit is here:

Why don’t you have that conversation with Jay Powell of the @federalreserve?

It’s not the fault of Bezos or @elonmusk that easy money policies are structured to disproportionately benefit the stock market nearly 90% of which is owned by the top 10%.

In my view applying the same solution (money printing) over and over again & producing ever wider wealth inequality is not a long term healthy, desirable or sustainable situation and is setting up for major blowback.

I don’t know when the dots are being connected but it is notable that perhaps Jay Powell has left himself vulnerable on that front by finally admitting that there is a link between monetary asset prices after previously denying that Fed policy has anything to do with inequality.

Look, I’m the first to acknowledge that the sheer vastness of the interventions have even taken me by surprise as we saw money supply growth, balance sheet expansions and debt expansion taken on never before seen historic levels.

Recall last year I was bearish in the lead up to the February top. Literally at the top I wrote:

“From my perch this market is the most dangerous we’ve seen since 2000. A market in full retard mode, utterly removed from any economic foundation, artificially propelled by knucklehead central bankers who are refusing to take responsibility for the reckless investor animal spirits they have unleashed resulting in the largest asset bubble of our time.”

My view then was that the Fed which had already again accelerated balance sheet expansions and rate cuts in advance of any Covid crisis and with unemployment still at 3.5% was setting up markets for dangerous times.

The covid crisis then triggered a 35% crash in a matter of weeks. 35% because of the very excess we had leading up to it.

According some Twitter dimwits I’ve been bearish since the March lows which is of course the polar opposite of the truth for I wrote on the day of the bottom:

“The 1929 redux tells us a big rally will come, either from here or from lower first still, and this rally will be awe inspiring, it’ll produce technical reconnects in a market that is now widely disconnected to the downside and it will bring back optimism”.

On that point I was fully correct. But clearly I was wrong on the following:

“But then the historical script suggests lower highs to come as the world is then confronted with the consequences of the costs of extinguishing this fire. The bill comes due as the world will be settled with even more debt, but now a much higher unemployment rate, poorer consumers, and companies focused on margin efficiencies.

1929 redux is staring us in the face and it says this won’t be a “V” recovery. This will take years of heightened volatility and wide price ranges to negotiate through and the first really big counter rally may prove itself to be a big fat sell. No matter how much the Fed prints.”

Instead of lower highs markets raced back to new highs and no consequences have come to bear so far even with a higher unemployment rate. Too overpowering proved the unprecedented liquidity injections helping ferment a never before seen set of equity inflows and retail mania: 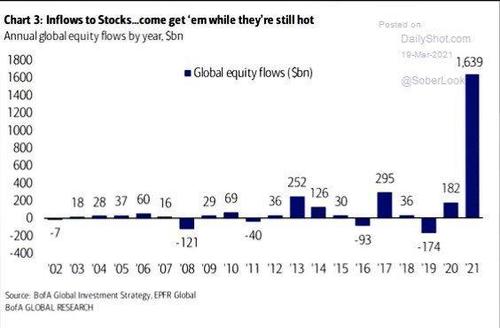 And clearly I did not foresee individual stocks behaving in such a manner:

I could show you dozens of examples, but I’ll just highlight this basic industrial stock here, a company that has been around since 1837. Not a small cap stock, not a hyper tech stock, nothing of the sort, but rather an industrial company that manufactures agricultural, construction, & forestry machinery, diesel engines & lawn care equipment. Deere ($DE).

This stock, and many others, have simply never behaved like this before. It’s simply outside of normal market behavior.

Sure it’s a linear chart, but even the run up to the 2007 top can’t match the technical disconnect we can observe now: 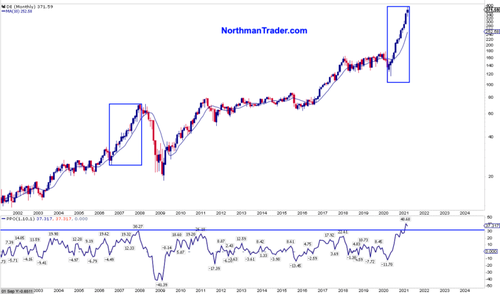 And note the excess of 2007 did not have a happy ending.

So let’s just note that markets have evolved in an unusual and unexpected way. And when they do you adjust with time and that’s what we have done over the past few months, from my perch very successfully so, as the technicals helped guide us through the market gyrations. Yet now we find ourselves in an even worst bubble than in February 2020 with asset prices even further disconnected from the economy and entirely incapable of sustaining themselves without ongoing intervention and stimulus and hence my statement from last year rings true again:

“From my perch this market is the most dangerous we’ve seen since 2000. A market in full retard mode, utterly removed from any economic foundation, artificially propelled by knucklehead central bankers who are refusing to take responsibility for the reckless investor animal spirits they have unleashed resulting in the largest asset bubble of our time.”

Be clear I’m not calling for a crash, yet I see again footprints in the charts that strongly suggest another larger re-balancing trade will develop in due time. As I highlighted last week the current battle of control resides with tech and yields and central bankers are again in full damage control mode with a barrage of Fed speakers this week.

Yet note, for all the happy talk of even more stimulus coming in the form of a $3 trillion infrastructure bill the limits of debt expansion may also be just ahead of us in the form of tax hikes.

The implication: After unprecedented interventions on both the fiscal and monetary fronts I submit this torrent level of interventions can not only not be maintained but is now slowly transitioning to a period of relative tightening. While not with rate hikes by central bankers or tapering of QE, but due to incremental less liquidity and a tightening imposed by the bond market.

As of this writing the broader market has not been challenged in any serious manner, and it keeps defending its upward bound trend since the March 2020 lows:

But the tags of the trend appear to become more frequently highlighting again the relevance o the trend line. And note the trend line while currently intact, is steep, very steep indeed and can hardly afford a technical break given the chart extensions we see across the stock universe (as in $DE).

To my eye it remains one of the most important aspect of this market bubble to watch. While the first real correction of 2021 will likely get bought a trend break of this size would leave a mark.

Perhaps the record of central bankers making the rich ever richer and widening the wealth gap to ever greater heights will remain consequence free, but I doubt it. But let’s see if Janet Yellen and Jerome Powell, aside from Ben Bernanke the key architects of this wealth gap construct will come under fire from Congress this week as they make their first joint appearances. I won’t hold my breath, but perhaps someone finally wakes up and connects the dots and dares to speak out.

The larger population hardly knows who runs the Fed or what the Fed does or the consequences of their actions and perhaps it is best for the Fed if the people never figure it out. For the record is quite clear: The Fed succeeds in one thing consistently: Making the rich richer while each recovery produces mere crumbs for the bottom 50%.

Weissmann Lashes Out at Trump Over Manafort, Stone Pardons – Cooks Up New Plot to Prosecute Them for Perjury and Obstruction