This market is absolutely insane.

As we reported over the weekend, on Thursday morning, Musk urged his Twitter followers to “use Signal,” an encrypted messaging app as an alternative to WhatsApp or Facebook Messenger.

However, since the market is caught in a speculators paradise, the first immediate thought that flowed through the minds’ of Robinhood traders after Musk tweeted was to buy a micro-cap Texas healthcare company pennystock called Signal Advance (SIGL) – with no full time employees other than the CEO  – which surged from the low millions to nearly a $100m market cap on just that one misinterpreted tweet.

It was up 1200% over Thursday and Friday even including Friday trading when the error should have been known. In fact, on Friday even Signal (the app, not the company) took to Twitter to explain that it has nothing to do with Signal Advance.

“It’s understandable that people want to invest in Signal’s record growth, but this isn’t us,” Signal tweeted. “We’re an independent 501c3 and our only investment is in your privacy.”

Is this what stock analysts mean when they say that the market is giving mixed Signals?

It’s understandable that people want to invest in Signal’s record growth, but this isn’t us. We’re an independent 501c3 and our only investment is in your privacy. pic.twitter.com/9EgMUZiEZf

So what about Monday – surely by then the “efficient market” would have time to digest the news that Musk’s reference to Signal was to the app and not SIGL stock, and would bring it back to its “fair value” near zero?

Well: this is what happened – the stock, which is extremely thinly traded, exploded from an open price of $7.49 to a high of $70.85 in minutes. 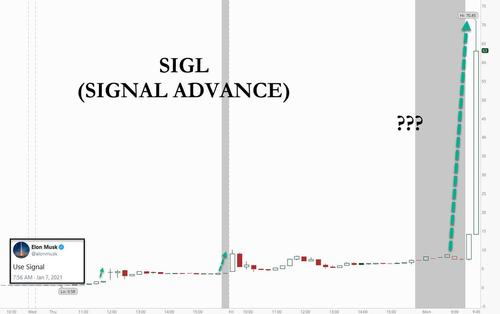 Why? Because momentum, and because 13-year-old traders just have to chase momentum.