Actually, There Is An Alternative…

On March 12, 1989, a research fellow at CERN named Tim Berners-Lee submitted a paper to the agency’s senior management, proposing a new way to organize information across computer networks.

The Internet was already in full swing by 1989, at least among governments and universities. But it was mostly used for email at that point, because there was no easy way to post and access different types of content.

Berners-Lee solved that problem, and his creation became known as the World Wide Web.

A few years later, a young software engineer named Marc Andreessen led the development of the first graphical web browser; it was called Mosaic, and it was instrumental in popularizing the Internet around the world.

Andreessen broke away from the Mosaic project and founded a new company– Netscape Communications. And its ‘Netscape Navigator’ quickly became the most popular web browser in the world.

Barely a year after its founding, Netscape decided to go public. And this was extremely unusual at the time.

Back in the 1980s, nearly EVERY company to IPO was profitable, and fairly seasoned. Apple, Microsoft, Adobe, etc. were all making money when they went public.

Sure, it was normal that sophisticated investors who could bear the risk would buy shares of unprofitable startups. But it was unthinkable that an unprofitable company would go public, or that mainstream investors would actually want to own the stock.

Netscape, despite the popularity of its browser, was losing tons of money, so its decision to go public was highly unusual.

But that didn’t seem to matter to investors; Netscape’s IPO was a smashing success. When it went public in August 1995, the share price doubled on the first day, and it was up 600% within a few months.

And soon, it seemed like every 20 year old with a website was going public. And not only were most of these companies unprofitable, many of them weren’t even generating revenue.

It took another 4+ years for the dot-com bubble to burst. And when it did, the decline was ferocious; the NASDAQ stock index dropped nearly 80% from its peak, and most of the former high-flying dotcoms went bust.

You’d think that would have been a valuable lesson, and that no one would repeat the same mistakes of the dot-com bubble again.

But that’s precisely what we’re seeing now… companies that lose tons of money are some of the most popular stocks in the world.

Uber, for example, has never turned a profit. Its operating cash flow has totaled NEGATIVE $11 billion over the past five years with no end in sight. Yet its stock is worth roughly $100 billion.

SnapChat similarly has lost billions of dollars over the years. Yet its stock is worth nearly $80 billion.

Even stocks that are profitable are trading at absurd valuations.

I know its sacrilege to criticize Tesla… but let’s be honest– even though the company finally had a full year of positive Free Cash Flow, the stock is trading at an unbelievable 1600x earnings.

In fact MOST of the market is overvalued; the current P/E ratio of the S&P 500 is nearly FORTY (versus a long-term average of 15).

Yet people keep piling into the market despite these extreme valuations, let alone the fact that the new ruling party wants to raise their taxes and create all sorts of debilitating regulations.

The common refrain is that ‘There is No Alternative,” or TINA.

In other words, because the Federal Reserve is printing so much money, it’s nearly impossible to find a fairly valued asset anymore.

But this TINA mentality demonstrates a remarkable lack of creativity or insight. And one need only look as far as gold. 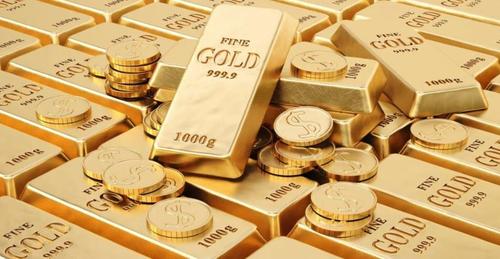 Now, typically when I write about gold, I discuss its utility as a hedge against systemic risk.

Gold is like an insurance policy. And if the proverbial ever hits the fan, its not a bad idea to own a little bit of an asset with a 5,000 year history of value and marketability.

Remember when the pandemic first hit last year? Gold went through the roof because everyone was in a panic. And by early August, gold hit an all-time high of $2,058.

About two days prior to that record high, when the price was in excess of $2,000 per troy ounce, I wrote that “a short-term correction” in gold prices might occur, especially “if a Covid vaccine is produced.”

And that’s pretty much what happened; gold prices started to decline slightly and are now down roughly 10.5% from the peak.

The S&P 500, on the other hand, is up 12% since August. Oil and natural gas prices are up more than 25%. Real estate across the United States (according to Zillow data) is up 6%.

Even prices of industrial and agricultural commodities like corn, rubber, copper, lumber, cotton, and iron are WAY up since August.

But gold is DOWN.

This makes gold one of the only major assets to fall over the past five months.

And yet the world is not exactly on a positive trend right now.

Public health officials have been terrorizing their citizens about the evil new Covid strain; one government minister in Singapore just said it would be 4-5 YEARS before Covid conditions went away.

Amid all of this, stock market valuations are near record levels… but gold is down 10%.

Now, I’m not suggesting anyone should sell their stocks to buy gold (we aren’t investment advisors anyhow); in fact there’s a case to be made that stocks will rise even further as long as the central bank keeps printing money.

The larger point is that this TINA mentality is total nonsense. It seems obvious that gold is a very credible alternative when so many other assets are overvalued.

Was the assault on the Capitol building a false flag?