A report released by The Special Inspector General for Afghanistan Reconstruction (known as SIGAR) has found that the United States wasted billions of dollars on capital assets such as buildings, motor vehicles and aircraft in Afghanistan.

SIGAR conducts audits, inspections and investigations to ensure U.S. taxpayer money invested in reconstruction is spent efficiently and the agency aims to prevent waste, fraud and abuse of funding. The picture is not a good one, as Statista’s Niall McCarthy notes, by the end of 2020, SIGAR reported that the U.S. has appropriated around $143.27 for relief and construction in the war-torn country since 2002 with the cost distributed across four key areas – security ($88.32 billion), governance and development ($35.95 billion), civilian operations ($14.87 billion) and humanitarian aid ($4.13 billion). 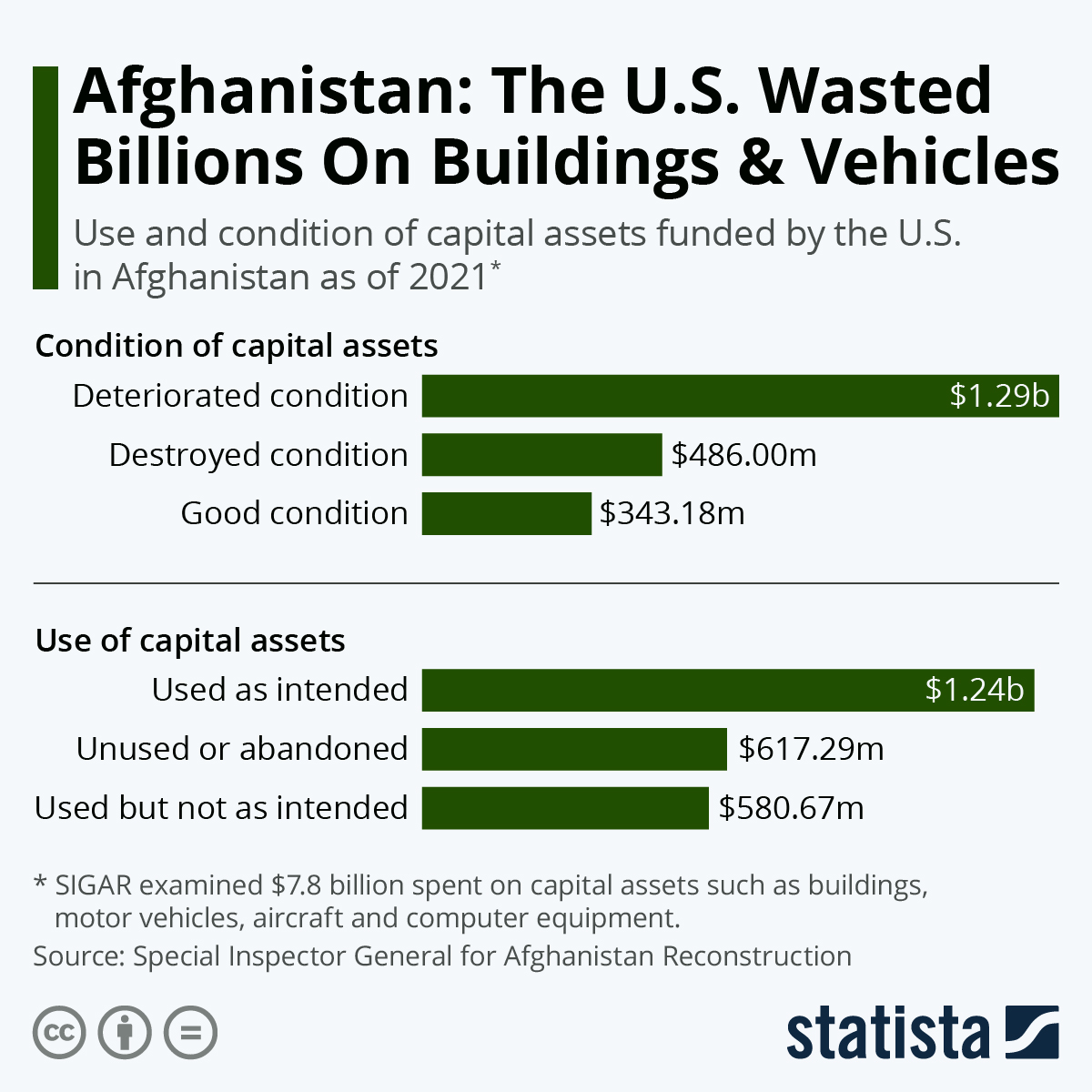 The latest report from the agency analyzed $7.8 billion spent on capital assets since 2008. It found that $2.4 billion was spent on buildings and vehicles that were unused or abandoned, were not used for their intended purposes or that had deteriorated or were destroyed. SIGAR did not report on the total amount spent as in some cases construction or procurement of assets had not been completed while maintenance costs were not available in other instances. The report stated that $1.2 billion of capital assets were being used as intended in the country while just over $580 million were indeed being used but for other roles than originally intended. A further $617 million worth of assets were unused or abandoned.

When it comes to the condition of U.S. financed assets, the story is similar. Approximately $343 million worth of capital assets were noted as being in good condition while close to $1.3 billion was recorded as “deteriorated” which means those assets are in a state beyond reasonable wear and tear which prevents them from being used as intended. SIGAR found that $486 million of assets have the status of “destroyed”. This can be linked to a disastrous plan to equip the Afghan military with 20 G.222 military transport aircraft for $486 million. 16 out of the 20 aircraft were sold for scrap metal for $40,257 and the four survivors remain discarded on a corner of Ramstein Airbase in Germany where they are available to any interested buyers.

Whitehead: Enemies Of The Deep State – The Government’s War On Domestic Terrorism Is A Trap