Cathie Wood made the first appearance in her Monday media tour when she took to CNBC at 3PM eastern to talk about the tech rout, which has crushed numerous ARK ETFs. ARKK was plumbing new lows when the conversation started with “the woman who has captured the attention of Wall Street”, as CNBC’s Wilfred Frost introduced her.

About The Sell Off

When asked how concerned she was about the market, Wood did not attribute the tech pullback to rates rising. “We’ve been struck that the market never priced in 0.5%, 1% or 1.5% interest rates,” she said. “Over time markets have used a normalized 3% to 5%, and we don’t think that’s why the market is correcting.”

“We’ve been in a 40 year bull market in bonds, so I think there’s a lot of confusion and a bit of paralysis here,” she commented. “There’s a very rapid rotation into value here,” she continued. “I think that’s been part of the reason for ARK’s setback. But this happened to us in Q4 2016, right after Trump was elected. In that period of time, our strategies went negative. What I said at the time and what I believe now is that the bull market was broadening out to incorporate value.”

“The worst thing that could happen to us would be a tech bubble,” she said, apparently unaware of what has happened in the last 12 months. 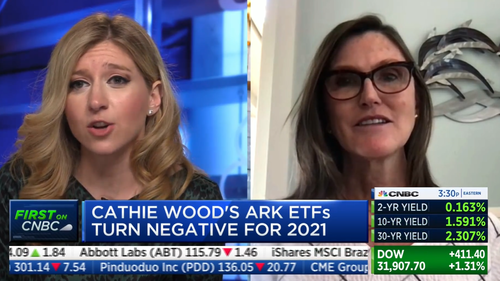 When asked about her new Tesla forecasts, Wood kept the carrot dangling on a string. “We’re about to publish, within a week or two, our new forecasts. Our confidence in Tesla has gone up for several reasons. It didn’t lose share when other auto manufacturers brought their EVs to market. But we do expect it will lose share,” she said.

“We believe Elon Musk, who over the weekend figured out that Tesla would offer full service driving to anyone that wants it,” is going to “be able to show us the path to autonomous quicker than analysts expect.”

She explained that she thought Tesla was ahead of other autonomous companies and, when asked about Tesla being Level 2 autonomous, she said “we believe Tesla has been doing this differently than other companies like Waymo and Cruise, so I can understand why there’s some confusion. We think there’s a misunderstanding about how they’re going to market.”

Wilfred then compared TSLA to AMZN, which suffered through 9 years of purgatory after the tech bubble burst. He asked if Tesla could do the same.

“Tesla has passed through that phase of its life,” she says. It’s “leading the charge” in battery cost and with its AI chip, which she says was 4 years ahead of Nvidia when it was produced. She also claimed Tesla had more data collected than “anyone out there” and that Tesla was, until recently, able to improve performance with over-the-air updates.

As many know, legacy automakers are also starting to do over-the-air updates.

When asked about Bitcoin, Wood said that the correlations to other assets have been “really really low”. The closest correlation, she said, has been to real estate. “We are seeing institutional movement into the space,” she said.

“We do think it’ll behavior more like the fixed income market, believe it or not,” she commented. “We would not be surprised” to see this new asset class act like part of a diversification strategy similar to one that people use with stocks and bonds, she explained.

“Make sure you’re on the right side of change,” Wood said when asked about big moves in finance and energy. “We think the carnage will be significant in energy and financial services in the long term,” Wood said.

“Nothing’s changed from our point of view on our long-term projections,” Wood said. “We’re becoming more and more optimistic,” she said.

When asked about another underappreciated name, Wood said said that Invitae is investing aggressively to be the leader in the molecular diagnostic space. The company is “leading the genomic revolution,” she said.

Recall, earlier in the day today we had noted how the ARKK pain trade continued to spill over from last week. Wood’s main ETF was about 25% off its recent highs heading into the open on Monday. Despite the NASDAQ trying to rally early in the session, by 1PM on the east coast, ARK’s Innovation ETF was near lows of the day, down 3.3%, amid a broader technology-related selloff. This has now become “the longest stretch of weekly losses for the Ark Innovation ETF” since the Covid selloff last year, according to Bloomberg.

Top holdings of the ARKK fund are also suffering: Tesla, despite making an odd and quite unnatural looking bounce early in the session, turned red and is down about 2% mid day. Square and Teledoc health are also lower by 2.76% and 3.5%, respectively, mid-day. 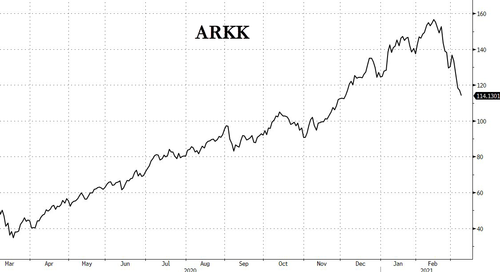 Previously we noted that all of ARK’s funds saw outflows on Friday of last week. And as ARK’s trade updates last week seemed to disclose, Wood’s strategy doesn’t appear to be changing. As we have been pointing out, that strategy appears to be selling large, liquid big cap names and rotating the cash into smaller, speculative, small cap names.