It appears that both confidence in the vaccine rollout as well as declining coronavirus infection numbers across previously highly impacted states are factors driving Americans back into resuming air travel.

According to new numbers from the Transportation Security Administration (TSA), air travel hit its highest point nationwide in almost a year on Friday, also amid broad re-opening mandates and a rollback in restrictions in a number of states.

The agency reports that it “screened 1.3 million people at airport security checkpoints Friday, the highest figure since March 15, 2020, according to TSA spokesperson Lisa Farbstein,” The Hill writes. 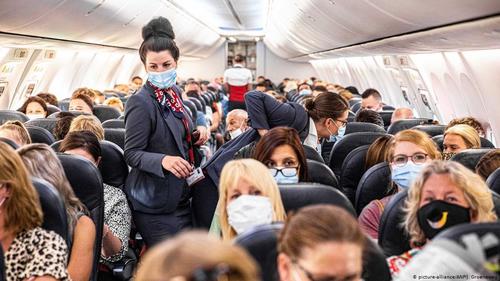 It comes as the Biden administration touted at the end of this week that over 100 million doses of the vaccine have been administered to Americans nationwide.

Over the past months reports began indicating travel numbers that suggested an approaching ‘return to normal’ over the November and December holidays – when prior single-day highs were seen. Airlines since last spring were forced to make major cuts to routes and number of flights, while at the same time implementing changes in cabin rules such as mask mandates.

Recall that airlines were already struggling even before the pandemic, but the nationwide lockdowns produced an effective halt in the majority of air travel for weeks last March when stay-at-home orders were issued across the majority of states.

BREAKING: @TSA officers screened 1,357,111 people at airport security checkpoints yesterday, Friday, March 12. The last time checkpoint throughput was that high was March 15, 2020. If you choose to fly, wear that mask!

Into last spring and summer travelers were still skittish despite multiple published studies and scientific institutions remarking on the surprisingly low levels of recorded transmissions of the virus due to air travel:

At first thought, a narrow metal tube in which strangers are crammed together for hours might seem like a flying petri dish, especially during a pandemic. The reality is a bit more nuanced. While there are risks associated with flying, it may be safer than you think.

For starters, the air quality on a commercial airliner is actually quite high, with the air volume in the cabin being completely refreshed every two to four minutes. Air flows into the cabin vertically — it enters from overhead vents and is sent downward in a circular motion, exiting at floor level. Once air leaves the cabin, about half is dumped outside, and the rest is sent through HEPA (high-efficiency particulate air) filters, similar to those used in hospitals, before being mixed with fresh outside air and entering the cabin again.

A spokesperson for Airlines for America, a major lobby group for the industry, said to The Hill this week, “We remain confident that this layered approach significantly reduces risk and are encouraged that science continues to confirm there is a very low risk of virus transmission onboard aircraft.”

Rand Paul: Dems Are “Angry, Unhinged, Deranged By Their Hatred” Of Trump

“This Is Nuts!” – Stocks Explode Higher After Fabricated CPI Print

Space Force Personnel Will Be Called “Guardians” (Of The Galaxy?)