While Jack Ma’s return to public view yesterday (following a roughly 3-month absence) was briefly reassuring for Alibaba shareholders, reality apparently set in on Thursday as the company’s shares tumbled again in Hong Kong, falling roughly 3%, after the People’s Bank of China published a batch of new draft antitrust rules which seemed to play at investors’ worst fears. 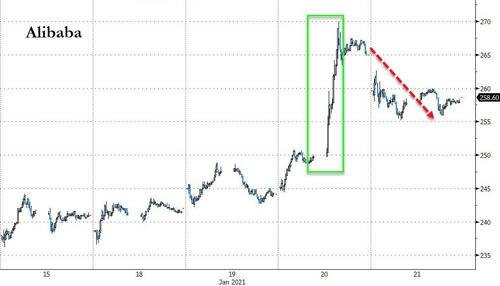 For those who haven’t followed the story, Alibaba founder Jack Ma, until recently the richest man in China, kicked off what has morphed into a multi-front war by the CCP on China’s biggest tech giants when he offered a handful of seemingly innocuous criticisms of Beijing’s tech regulatory structure during a late-October tech conference.

Ten days later, Beijing abruptly canceled Ant Group’s $37BN Shanghai Stock Market debut. The spinoff of what is essentially Alibaba’s consumer payments and financial services wing was expected to be the biggest IPO on record. Only then did the world begin to realize that Ma’s transgressions wouldn’t simply be waved away.

Ma’s Oct. 24 tech conference appearance would be the last time he was seen in public until yesterday’s publication of a pre-recorded video wherein Ma praised China’s teachers, while promising that he and his “colleagues” – presumably China’s billionaire class – would be tending more devotion to the “public welfare”.

The PBoC released the first draft of potential new anti-trust regulations targeting Alibaba late last year, and now it appears another set of rules has been refined to specifically target Ant – but not Ant alone. Both Ant, and its popular Alipay service, and rival Tencent, and its rival WeChat Pay, the country’s 2nd-largest payments service after Alipay, will also be targeted.

In other words, it appears the CCP is taking the breakup of its own big tech space a step beyond even the most aggressive analyst expectations, and way beyond anything that will likely be seen in the US ‘Big Tech’ space.

The draft rules issued by the PBoC, which have not yet been enacted, make it clear that regulators are now targeting Ant’s core Alipay payments service as a monopoly that might have to be broken up. The central bank had previously suggested that it might be content if Ant “returned to its roots” as a payments provider, while placing its fast-growing lending businesses into a new holding vehicle that would face more stringent oversight. China’s market regulator launched a separate anti-monopoly investigation into Alibaba on December 24 that is likely to focus on the group’s relationship with merchants using its ecommerce platforms, but it has not said that Ant is also in its crosshairs.

China’s market regulator launched a separate anti-monopoly investigation into Alibaba on December 24 that is likely to focus on the group’s relationship with merchants using its ecommerce platforms, but it has not said that Ant is also in its crosshairs.

Under the PBoC’s new rules, it can advise the State Administration of Market Regulation to break up any “non-bank payment company” that controls more than half of the market — or any two with a combined market share of more than 67 per cent. The latter provision suggests that internet group Tencent’s WeChat Pay, China’s second-largest payments service after Alipay, could also be targeted.

Another analyst warned that the new draft rules from the PBoC, which, until very recently, was never involved in “anti-trust” issues, suggest that Beijing won’t be backing down. While it once appeared that Beijing’s crackdown might simply halt Ant’s expansion, forcing it to return to its “roots”, it now appears that outlook was too optimistic. The writing is on the wall: “…Ant could be torn apart,” according to a Chinese legal expert quoted by the FT.

The PBoC “is stepping into someone else’s territory to state what a monopoly is — it signals they are strengthening their control”, said Angela Zhang, an antitrust expert and head of the Centre for Chinese Law at the University of Hong Kong. “Both Ant and Tencent have a strong market position in payments — I imagine they will be quite nervous about this.” A Chinese antitrust lawyer, who asked not to be identified, added that the new rules “indicate Ant could be torn apart”.

At first glance, one must almost wonder: after all the work the Chinese State did nurturing the country’s tech sector, investing massive resources which essentially helped elevate it to a global rival to the US, or at least a close second (they’re definitely ahead of Europe, at the very least), it now appears Beijing is actively trying to tear it all down. 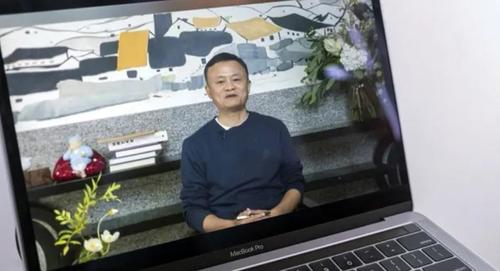 Dismantling the tech giants might open up more competition within China’s domestic economy, but it will end any hopes of the country’s tech giants expanding to challenge the West.

But it appears this is a hit that the CCP is willing to take in order to ensure Ma and his fellow billionaires don’t threaten the Party’s hold on power.

What Texas Can and Cannot Do

The Freedom To Pursue Happiness

Mysterious Aircraft Pound Turkish Oil Smugglers In Syria; US Supply Convoys Are Blown Up In Iraq