If you are unclear what’s happening, frankly, you aren’t paying attention. The central banks, at the urging of the World Economic Forum, have come from behind the shadows to assert their will over the world.

It doesn’t matter that Yellen was the architect of the worst recovery in history or that her incessant dithering on ending QE and raising rates. She’s a woman. Right?

The only good thing about Yellen at Treasury is that Steve “Mr. Goldman” Mnuchin is gone. All Mnuchin did at Treasury was ensure the outsourcing of monetary policy to Blackrock through the loan programs of the CARES Act and sanction anyone who didn’t pay Goldman enough Tribute.

So, from that perspective, I guess, Yellen is an upgrade. Because she’s just an incompetent career bureaucrat. But what this means is that since personnel is policy in D.C. the central banks will become the center of policy.

And that means full international coordination by them to implement not only MMT — Modern Monetary Theory — but also accelerate the adoption of digital-only versions of national currencies, CBDCs, to support the full takeover of the economy by central planners.

Given Biden’s first foreign policy speech last night and the very real smackdown issued by Russian President Vladimir Putin at this year’s Virtual Davos, expect nothing but more of what ailed us under Trump taken up another notch.

Putin’s speech was one for the ages, to be honest, and everyone should read it.

Because Putin openly declared his opposition to the brave new world of Klaus Schwab and his Davos Crowd. And that means he incurred the wrath of the policy-wonks in D.C, Brussels and London.

Not that he didn’t have that already, but again, I believe we ain’t seen nothin’ yet when it comes to aggression. The problem with that however is that it openly risks open military conflict not only in Syria where Biden immediately sent troops across the Iraqi border but also in the Black Sea

As I’ve said many times, the stakes are higher today than they were in 2016 for these people. The Obama Restoration that is the Fungal Presidency depends solely on the central banks taking control over the global economy, sidelining the traditional, and terminally corrupt, banking system.

Yes, I can hear you saying, “But they are one and the same.” But, not really, not anymore. In order to pull this off someone will have to be sacrificed to the incredibly angry mob that is brewing outside the capitols of every major western power.

This planned destruction of the West’s middle class is creating an unruly, #ungovernable mob. This week that mob attacked Wall St. at its heart. Going after the hedge funds who are nothing but fronts for the big banks.

They’ve used their market position and capture of the regulators (including Yellen herself) to create one-way trades, draining the vitality of the economy through fees, taxes and barriers-to-entry.

That’s what animated the GameStop Rebellion of the past couple of weeks and we’ll see more of these #ShortSqueezes going forward. The markets, thanks to the ocean of liquidity sloshing around and now the promise of another massive stimulus bill, are so thoroughly unbalanced that anything could become a trigger for another meltdown.

And that brings me to the next part of the story in the conquering of governments by the central banks. Mario Draghi (yes that guy!) has been given the right to try and forma government from the ashes of the last terrible government in Italy.

President Sergio Mattarella is as pro-EU and Italian Swamp as it gets. This will be the fourth time he has intervened far beyond his constitutional capacity since Five Star Movement and Lega shocked the world in 2018 with their bipartisan populist uprising.

Because those election results would never hold up today, Mattarella continues to shield Italy from new elections. It’s fascinating how a mostly ceremonial (mostly peaceful) position like his has become more powerful than any other, all because Brussels demands it be so.

So, Former ECB President Mario Draghi will likely become the next Prime Minister of Italy over the objections of everyone outside of the Rome Mafia.

“In my opinion, the 5-Star Movement has the duty to meet (Draghi), listen and then take a position on the basis of what our parliamentarians decide,” said Luigi Di Maio, the outgoing foreign minister and party big-wig.

“We did not seek the stalemate … but it is precisely in these circumstances that a political force shows itself to be mature in the eyes of the country.”

Former prime minister Silvio Berlusconi suggested he might be ready to support a Draghi government – a move that could cause a schism within the right-wing opposition bloc.

Now it was Di Maio who betrayed Lega leader Matteo Salvini in September 2019 to form the outgoing government which was never stable. It was a clear betrayal by Di Maio who I said at the time would become Italy’s version of Alexis Tsipras, the former Greek Prime Minister who folded to Brussels in 2015 if he did just that.

But Di Maio is now in the same position that another reformer turned toady was in after he betrayed his country in 2015, Greece’s Alexis Tsipras.

To remind everyone, Tsipras is now out of a job and one of the most hated people in Greece. So complete was his sell out of the Greek people, he ushered back into power a center-right government in July.

Five Star cannot go for new elections because their position is even more precarious, poll-wise, than it was then. I was right about that. And the same goes for Berlusconi’s Forza Italia, which is massively over-represented in the current parliament.

So, of course, Berlusconi will be happy to get back into some state of relevance here and would happily betray the Center-Right Coalition he’s in with Lega and FdL, but it all still comes down to Five Star who control the balance of power. 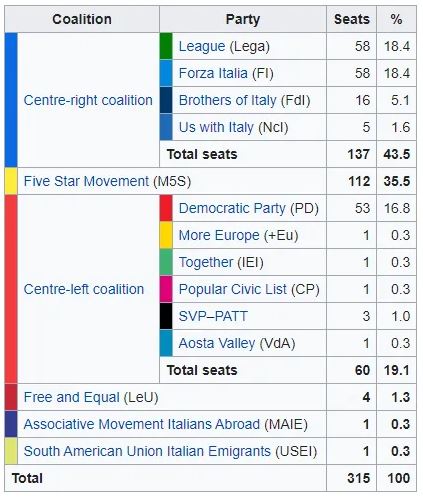 There is no path to a workable Majority without Five Star. So, the question will be whether Di Maio still has enough clout in the party to finish the job of destroying it or will his faction be marginalized and we see elections regardless of Mattarella’s wishes.

If Draghi cannot make this work then things get interesting. But I sincerely doubt that will happen. No one in Rome wants Lega and the Brothers of Italy to take charge. Mattarella’s job here is to get Draghi in power and have him limp along until next year’s elections.

During that year Draghi will complete the betrayal of Italy to the EU finishing the work he started as President of the ECB, buying up hundreds of billions in Italian sovereign debt to use as leverage over an Italian government he’s about to lead.

As political stitch-ups go, no one tops the Italians for court intrigue. If it all wasn’t so depressing it would almost be as compelling as cable.

All of this is happening because the people of Italy have shifted farther to the right than they have since the time of Mussolini.

Remember, when Salvini was in power talking about taking Italy out of the euro Draghi’s stance was that Italy was free to go as long as it paid its bill to Europe on the way out the door.

Now he’s set to control which way the door swings.

From a market perspective Wall St. loved this. Italian debt had begun breaking up in yield and needed to be controlled. ECB President Christine Lagarde didn’t have to do anything there but she has the bigger problem that there’s a brewing dollar short squeeze happening thanks to the fallout from the GameStop Rebellion and attempted short squeeze on silver.

Today’s terrible U.S. jobs report and the Senate filibuster-proofing the $1.9 trillion stimulus package stick-saved the euro which was falling off a cliff and sovereign debt yields which were spiking into the announcement.

Those trades reversed on the U.S. open as the prospect of a dovish Fed means, as Zerohedge put in “Bad News is Good News Again.”

But, hey, they let gold save face at $1800 while oil surged towards $60 and food prices continue to skyrocket. 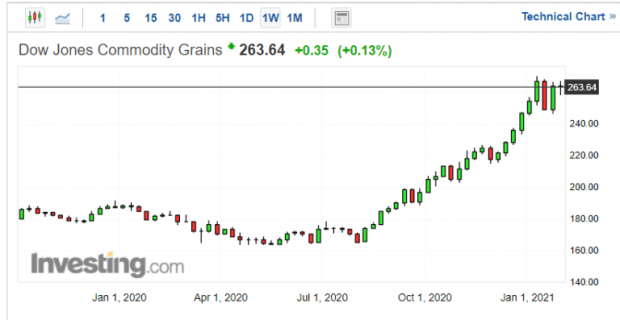 But we shouldn’t worry about any of that.

In the world run by central bankers risk is truly a four-letter word and tyranny speaks in incomprehensible jargon.

For those that voted for Biden and didn’t vote for Draghi, all that matters is that they bribe you with SOMA and maintain nominal growth along with the illusion anyone in power cares one whit about what the people themselves want.

The only problem is that illusion is failing. My advice to them?

The post All Hail the Conquering Central Bankers – Or Else appeared first on LewRockwell.

Biden’s $15 Minimum Wage Plan Will Not Be In Stimulus Bill, Parliamentarian Rules