Last week a Twitter war broke out between progressive Democrats and Amazon – after Sen. Bernie Sanders said he would meet with Amazon workers on Friday to discuss their vote to unionize. 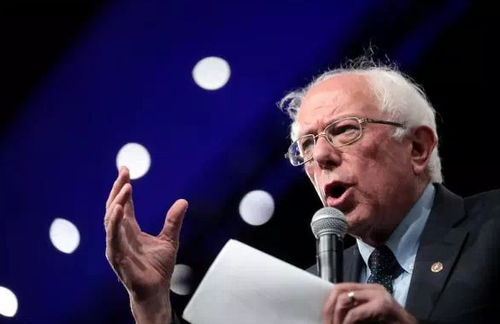 In response to Sanders’ visit, Dave Clark – CEO of worldwide consumer blew his stack, tweeting “I often say we are the Bernie Sanders of employers, but that’s not quite right because we actually deliver a progressive workplace for our constituents: a $15 minimum wage, health care from day one, career progression, and a safe and inclusive work environment.”

To which Amazon’s corporate news account fired back: “You don’t really believe the peeing in bottles thing, do you? If that were true, nobody would work for us.”

1/2 You don’t really believe the peeing in bottles thing, do you? If that were true, nobody would work for us. The truth is that we have over a million incredible employees around the world who are proud of what they do, and have great wages and health care from day one.

Over the past decade, several reports emerged over deplorable conditions at Amazon warehouses and corporate headquarters.

In 2011, the brutal work environment at an Amazon warehouse in Breinigsville, Pennsylvania were reported in the Morning Call.

In 2012, the Seattle Times published a blockbuster report about overworked, underpaid staff who were encouraged to lie about workplace injuries to avoid having to file reports.

In 2015, the New York Times revealed that conditions at Amazon headquarters are cutthroat.

“Nearly every person I worked with, I saw cry at their desk.” –Bo Olson

And in April of 2018, journalist and author James Bloodworth reported what he saw after going undercover at an Amazon warehouse in Staffordshire, UK, where he found horrendous conditions in which some workers are forced to pee in bottles.

“People just peed in bottles because they lived in fear of being ­disciplined over ‘idle time’ and ­losing their jobs just because they needed the loo.” -The Sun

So, in response to Amazon denying that workers had to pee in bottles – multiple current and former employees came forward with receipts.

As The Verge notes: “Indeed, after Amazon sent out its ill-judged tweet, reporters who cover the company’s labor practices practically lined up to soak the firm with evidence. These included English journalist James Bloodworth, whose 2018 book Hired: Six Months Undercover in Low-Wage Britain documented his experience of low-paid work for companies including Amazon.”

Look at the stat and consider the context https://t.co/9bSy3Jv7hC pic.twitter.com/DLlxdb7DV3

Here’s Will Evans from The Center of Investigative Reporting:

Peeing at Amazon – or not being able to – is an actual thing. Here’s what workers told me. https://t.co/D0lp4pdQ5D https://t.co/eqFiS8WZbG pic.twitter.com/RVLOYezGvE

And Lauren Kaori Gurley from Motherboard. (Gurley also wrote a story with photographic evidence, including numerous examples from the subreddit for Amazon delivery drivers.)

As a labor reporter who covers Amazon extensively…I can say Amazon delivery drivers not having a time or place to pee is one of the most universal concerns I hear about https://t.co/pG81MDf5TU pic.twitter.com/h3pGhOok1y

Even BuzzFeed’s Ken Bensinger chimed in, tweeting: “Amazon claims its workers don’t pee in bottles; defenders say it’s an urban legend. But these photos sent to me by a former driver for a former @amazon contractor called Synctruck in a California facility suggest strongly otherwise.”

Amazon claims its workers don’t pee in bottles; defenders say it’s an urban legend. But these photos sent to me by a former driver for a former @amazon contractor called Synctruck in a California facility suggest strongly otherwise. https://t.co/hp4zCqOxRO pic.twitter.com/StHNvV9B1x

While gawking at the urine, pause to look at the other line in that document and consider the work culture it describes: “Everyone is replaceable.”

More via The Verge:

The Intercept added yet more evidence to the mounting case against Amazon with a new report published on Thursday detailing not only more cases of drivers urinating into bottles, but also resorting to defecating into bags. And the most damning reveal is that Amazon was made aware of this because it began reprimanding employees for the behavior when the bottles and bags were left inside Amazon delivery vehicles, The Intercept reports.

“We’ve noticed an uptick recently of all kinds of unsanitary garbage being left inside bags: used masks, gloves, bottles of urine,” reads an email from an Amazon logistics manager provided to The Intercept by a Pittsburgh area employee. “By scanning the QR code on the bag, we can easily identify the DA who was in possession of the bag last. These behaviors are unacceptable, and will result in Tier 1 Infractions going forward. Please communicate this message to your drivers. I know if may seem obvious, or like something you shouldn’t need to coach, but please be explicit when communicating the message that they CANNOT poop, or leave bottles of urine inside bags.”

Indeed, although Amazon is trying to refute stories of “peeing in bottles” that have become shorthand for the company’s poor working conditions, they’re only the tip of the iceberg.

Other evidence includes the high injury rates in Amazon warehouses (7.7 serious injuries per 100 employees); employees dying from COVID-19 after complaints the company wasn’t doing enough to mitigate risks from the virus; widespread union-busting; production targets that treat humans like robots; and gruesome anecdotes like the story of the Amazon worker who died from a heart attack and who, say colleagues, was left on the work floor for 20 minutes before receiving treatment.

Perhaps Amazon’s social media team should make sure there isn’t an avalanche of evidence before denying widespread reporting on worker conditions.

The End Of Cheap Food