New COVID-19 cases and deaths have been on a steady decline in Canada since early January, but rising infections at one Amazon facility in the country forced local health officials to shut down a fulfillment center for the next two weeks, reported Global News. 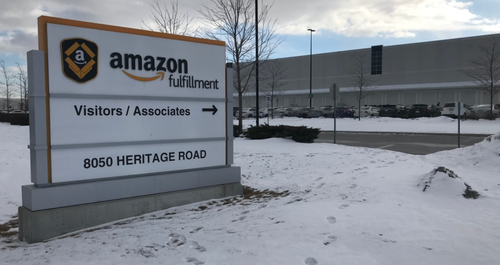 An Amazon facility in Brampton, Canada, a city in Ontario’s Greater Toronto Area, has closed, and all employees at the facility are self-isolating for the next two weeks, effective Saturday.

“The current public health investigation has determined that high-risk exposure to COVID-19 for everyone working at Amazon Heritage cannot be ruled out. Over the past few weeks, the rate of COVID-19 infection across Peel has been decreasing while the rate inside this facility has been increasing significantly,” Lawrence Loh, medical officer of health for the Peel region, said in a Friday statement.

Infections across the Regional Municipality of Peel that houses Brampton have been on a steady decline, though cases at the Amazon facility have been surging. Despite Amazon’s attempt to contain the outbreak, the facility recorded 600 cases since October. The facility’s closure will allow the e-commerce giant to pursue “additional operational changes” that health officials ordered to avoid future outbreaks, said Loh.

“There’s evidence that those cases are actually spreading outside the contained clusters that have been previously identified,” he said.

Several of the most recent infections were found to be more contagious variants of COVID-19. “This Amazon facility is in a vulnerable community and employs thousands of people,” Loh said.

“Immediate action must be taken to protect these essential workers and the community where they live,”he said.

Amazon Canada spokesperson Dave Bauer said the e-commerce company is regularly testing employees at its facilities, adding that “the closure may have some short-term impact on our Canadian customers.”

… and nearly one year ago, at least ten Amazon warehouses in North America (mainly the US) had workers who contracted the virus. By now, one would imagine that Amazon would’ve figured out the process to mitigate outbreaks at its fulfillment centers. By late 2020, WaPo reported nearly 20,000 warehouse employees tested positive for the virus across the US.

Last month, Amazon went on the offensive and sued New York’s attorney general seeking to stop the state from taking legal action over its early COVID-19 response, including its firing of activist Christian Smalls, and arguing that State Attorney General Letitia James exceeded her authority to penalize the company for alleged failures in its pandemic safety protocols and treatment of workers at New York City warehouses.

With some downtime, perhaps the Brampton facility employees will take notice of the 5,800 workers in Bessemer, Alabama, who are attempting to unionize.