American Airlines is finally ending the literal circus that was becoming “emotional support animals” at airports and in airplanes nationwide. Hopefully, other airlines will follow suit.

Back in the day, there were seeing eye dogs, sheep herding dogs and cadaver dogs that were specially trained and that was it. Every good doggo was an “emotional support animal” for its owner, which is one of the best parts of having a pet: they can calm you down, they can bring joy into your life and they can be your best friend.

But if you don’t know someone that has wrapped their dog up in a military style pet-vest with the words “emotional support animal” written on it lately – as if their “specially trained” dog’s key goal is to somehow psychoanalyze you and offer you written notes on the “anxiety” you feel from capitalism or the patriarchy, versus simply eating, sleeping, farting and crapping – then you haven’t been paying attention. 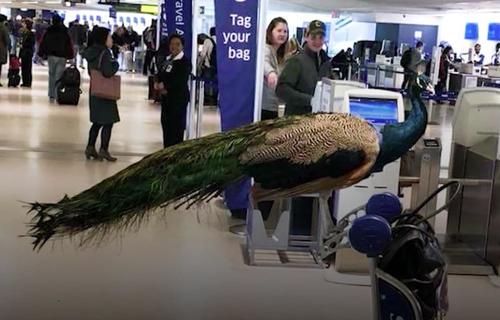 But American Airlines appears to have finally seen enough. The airline has made a policy change that “matches a new Department of Transportation regulation that says airlines aren’t required to treat emotional support animals as service animals,” according to CNN. The rules come into effect on January 11.

At that point, American Airlines says it will “will no longer authorize new travel for animals that do not meet that definition, such as emotional support animals.”

Emotional support animals are supposed to be “prescribed by mental health professionals to provide comfort and support, but unlike service animals, they are not required to have training in specific tasks.”

Jessica Tyler, president of cargo and vice president of airport excellence for American said: “We’re confident this approach will enable us to better serve our customers, particularly those with disabilities who travel with service animals, and better protect our team members at the airport and on the aircraft.”

Among the airline’s concerns was that “passengers were fraudulently passing off their pets as the more loosely defined and fee-free category of emotional support animals”.

What gave it away, guys? Was it the peacock?

Bagholder’s Row: Condo At NYC’s One57 Sells For A Record 51% Discount