Pretty soon, maybe AstraZeneca can stop blaming European governments for stoking skepticism about the company’s COVID jab, and start blaming the US (or maybe the drugmaking giant might consider accepting some responsibility, considering the reaction to rare blood clots isn’t the first safety issue to mar the jabs reputation). 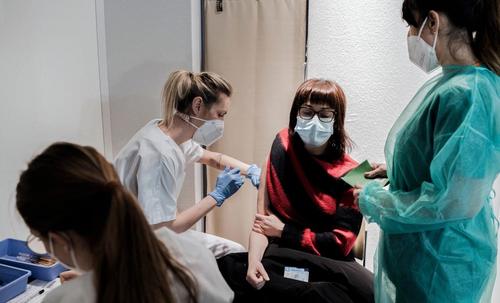 One day after proclaiming to the world that an extremely thorough and credible study based in the US (but carried out both in the US and across South America) had shown its jab to be 79% effective at preventing COVID (and 100% effective at preventing serious cases of the virus-caused disease) US officials are slamming the drug company and the data for possibly misrepresenting the vaccine’s efficacy.

Late Monday, the Data and Safety Monitoring Board (DSMB) notified NIAID, BARDA, and AstraZeneca that it was concerned by information released by AstraZeneca on initial data from its COVID-19 vaccine clinical trial. The DSMB expressed concern that AstraZeneca may have included outdated information from that trial, which may have provided an incomplete view of the efficacy data. We urge the company to work with the DSMB to review the efficacy data and ensure the most accurate, up-to-date efficacy data be made public as quickly as possible. Authorization and guidelines for use of the vaccine in the United States will be determined by the Food and Drug Administration and Centers for Disease Control and Prevention after thorough review of the data by independent advisory committees.

And once again, the AZ shot – which is a linchpin of the WHO’s effort to vaccinate poorer countries via its Bill Gates-approved COVAX initiative – has been mired in controversy. Notably, AstraZeneca neglected to include key numbers like the number of trial participants who developed ‘severe COVID’. The company’s president told CNBC the number was ‘5’ during an interview on CNBC’s Squawk Box shortly after the data were released.

“The way they handled their data early on, AstraZeneca basically shot themselves in the foot,” Julian Tang, a virologist at the University of Leicester, said even before the latest issue arose. “Even though the new study confirms what we previously thought about the vaccine’s efficacy, people may have lingering doubts,” he said. “Unfortunately, that might mean more people will die of COVID.”

Criticisms of AstraZeneca studies stem back to the first data released in the UK, which purported to show that the jab was 70% effective. However, the trial data didn’t account for a manufacturing mistake, and also didn’t include enough participants over the age of 65 to deduce efficacy among older patients. European governments like Germany and France responded by initially limiting the jab to patients under the age of 65. US authorities suspended the US trial for 6 weeks last fall for mysterious reasons that were never fully explained. Following the latest release, Astrazeneca head of research and development Mene Pangalos called the data “much cleaner” than prior releases, expressing hope it “puts to bed any doubts.”

In a report on the DSMB’s complaints, the Associated Press warned that this latest ‘speed bump’ could have a lasting impact, even if the company clears up the issue, before citing the decades-long lingering doubts about the measles vaccine that have supercharged the anti-vaxxer movement in the US.

As analysts scrambled to interpret the statement, one scientist on twitter claimed the US government has stopped just short of accusing AstraZeneca of manipulating its trial data.

This is a highly unusual statement by the US National Institute of Allergy and Infectious Diseases (NIAID). It comes close to accusing Oxford/AZ of having wilfully misrepresented some results from their recent US vaccine trial. https://t.co/cj86TYdY7e

To clarify, there is no obvious conflict of interest between NIAID and Oxford/AZ. the AZ US Phase III trial was funded by BARDA, which is part of the US Department of Health and Human Services (HHS), and NIAID was involved.https://t.co/Vr7xm7ocoP

After all the criticism levied at European leaders for taking extreme precaution and halting the shots over reports of a handful of cases of deadly blood clots developing in certain patients post-vaccination, is it now Dr. Anthony Fauci’s fault that trust in the world’s most important COVID vaccine has tumbled to an all-time low?