No matter if it’s Republicans under former President Trump or Democrats under President Biden, the one commonality between these two political parties is that they are in massive support of government relief programs and lender forbearance programs to keep small and medium-sized enterprises from defaulting on their debt as revenue collapsed during the virus pandemic.

Washington, DC-based think tank Urban Institute analyzed data from commercial data and analytics firm Dun & Bradstreet of one million businesses between September 2019 and January 2021 to examine trends before and after the federal government closed the economy to mitigate the virus spread. What they found was despite small businesses sustaining massive revenue declines, many of them remained in solid credit standings. 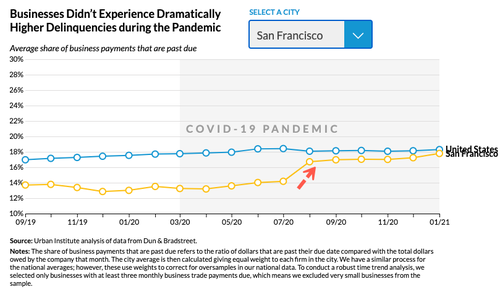 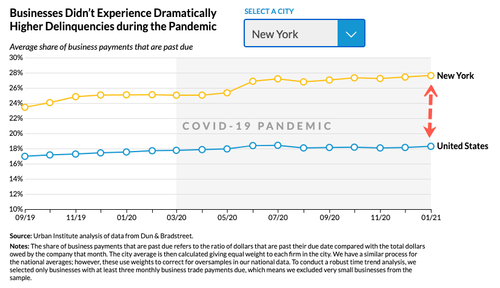 Many small businesses were transformed into zombie companies, kept alive by the Paycheck Protection Program (PPP) and other stimulus programs. These businesses have slashed costs and payrolls; landlords and creditors have allowed them flexibility in rent payments or servicing debts.

“It’s a good sign that small businesses are maintaining strong credit and increasing their cash on hand, but their ultimate standing will depend on future supports and the pace of the economic recovery,” said Urban Institute. At the moment, some ten million jobs are missing from the economy since the virus pandemic began. Small businesses are the lifeblood of the economy, accounting for more than 50% of all jobs.

The combined result of PPP support, cost reductions, and forbearances has favored some small businesses whose cash holdings are significantly higher.

“Shrinking payroll, reducing physical space, and other accommodations are painful for small businesses and may constrain their ability to grow,” said Urban Institute. “It’s also unclear what will happen when creditors cease to offer flexibility for businesses on repayment of their built-up amounts owed.”

When government relief programs and forbearances expire (maybe not until later this year considering Biden’s new stimulus program) – there comes a time when small businesses are taken off life support and will face the consequences of servicing debt and paying rent in an economy that is entirely dependent on massive fiscal packages.

Despite the relatively strong credit metrics, small businesses are on government life support – any removal of the support will create a fiscal cliff.