Thailand is undergoing a massive labor shortage as a result of migrant workers leaving the country during Covid.

The country’s solution? Put its prisoners to work, according to Bloomberg. Thai Justice Minister Somsak Thepsuthin has implemented a program wherein companies can run their production facilities using inmates nearing the end of their jail sentences. The program will apply to those serving time for non-violent offenses, like drug use.

The hope is twofold: one, to address the labor shortage and two, to help those nearly out of prison transition without the stigma of having just been in jail. Manufacturers will get the benefits of tax breaks and prisoners could be on their way to a full time job for when they leave jail.

Somsak commented: “This is an important project that needs to happen. It helps companies and inmates, and it saves taxpayers’ money.” 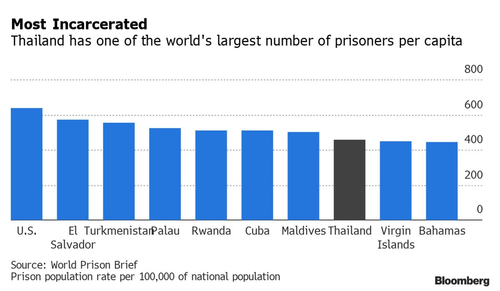 Thailand relies heavily on transient workers to make goods for exports, which is “the country’s biggest growth engine”. At the same time, Thai prisons have been overrun and are “bursting at the seams”, stocked to more than 5% of capacity. As of now, prisons are taking in 15,000 inmates per month and only releasing 12,000 per month. To compound problems, the country only has 30,000 monitoring devices, which would be used to monitor those released early, ready for use.

Somsak thinks the opportunity could be robust, since 82% of inmates in Thailand are due to non-violent offenses, mostly narcotics charges. He also expects about $198 million in seizures of funds from drug traffickers through the country this year.

An estimated 700,000 workers, heavily distributed in industries like tourism, services and construction, were let go from jobs due to Covid. About 200,000 returned home to countries like Myanmar and Laos, the report notes.

At one labor park in Samut Sakhon, companies have already started hiring “dozens of inmates” to do things like assemble bicycles and make Sriracha sauce.

Los Angeles County Is Riskiest Area In The US: FEMA