Authored by Mark Glennon via Wirepoints.org,

Despair, as best as we can tell, is the emotion growing most rapidly in Illinois, and yesterday, February 17, was particularly dispiriting.

Three stories told those who believe Illinois is on the wrong track that the state’s political establishment cannot care less about their concerns. Disdain and even hatred about those concerns prevail.

First was Gov. JB Pritzker’s State of the State and Budget Address. It’s not just that it was more of the same refusal to undertake the major reforms needed to solve the fiscal crisis, which we are writing about separately. It was the extreme rhetoric Pritzker used to attack a political obstacle that doesn’t exist.

That political obstacle, Pritzker said, is Illinois Republicans. Their purposeful destructiveness has undermined the mission of putting Illinois on the right path, Pritzker would have us believe.  “In essence, they eliminated the fire department, burnt down the house, and poured gas on the flames — and now they’re asking why we’re not doing more to prevent fires,” he said.

In truth, however, Republicans have been unable to pass or block a single thing of any consequence during the Pritzker Administration because Pritzker’s party has held a supermajority in the General Assembly for years. Nor do Republicans hold even one statewide office. He has faced no political obstacle from those he excoriated.

Second, Illinois finalized the Culturally Responsive Teaching and Leading Standards through a vote by a legislative committee. A firestorm of opposition preceded the vote, expressed by Illinoisans who saw what the standards were plainly designed to accomplish: political indoctrination of kindergarten through high school students, imposing radically divisive critical race theory on classrooms.

Countless parents across the state were livid, but they watched helplessly as the standards were sold to the public through distortion and outright dishonesty, which we wrote about here.

Third, a commission appointed by Chicago Mayor Lori Lightfoot to identify city statutes that perhaps should be removed returned its list of what it called “problematic” statues. The list includes five of Abraham Lincoln and two of George Washington.

One, of a Native American, is titled A Signal of Peace, and was dedicated by an owner who said the monument was intended as a permanent symbol of respect for native people.

Another, directed at antisemitism, bears a quote from a speech George Washington delivered to a Jewish congregation: “The government of United States, which gives to bigotry no sanction, to persecution no assistance, requires only that they who live under its protection should demean themselves as good citizens, in giving it on all occasions their effectual support.” A bronze plaque placed by the donor reads: “Symbol of American tolerance and unity and of the cooperation of people of all races and creeds in the building of the United States.”

And in the height or irony, one, shown here, is simply called The Republic. 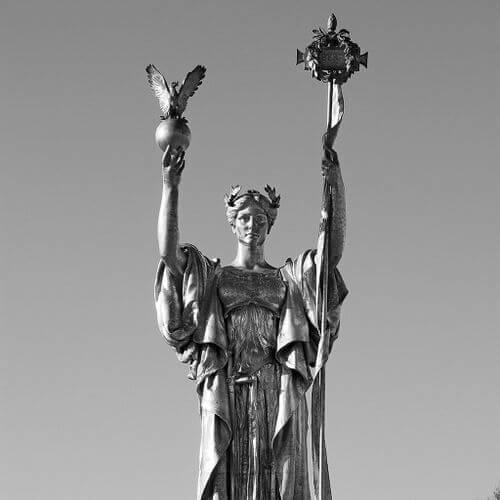 Most Illinoisans may think it preposterous that those statues could be tagged for possible removal, but Lightfoot is taking her commission’s list seriously.  “This project is a powerful opportunity for us to come together as a city to assess the many monuments and memorials across our neighborhoods and communities — to face our history and what and how we memorialize that history,” Lightfoot said in a statement.

The common element in each of those stories is the extreme contempt, even hatred, that Illinois’ political leadership shows for the most fundamental values held by many Illinoisans. And they make no effort to hide it. They simply don’t care.

It is therefore understandable if despair is the sentiment growing most rapidly in Illinois.

We can only hope that conviction, courage and resilience remain dominant and prevail against a government so estranged from so many of its own people.