The subject of student loan debt cancellation keeps resurfacing. Let’s recap why it’s a bad idea starting with a new study by Wharton.

Forgiveness of outstanding student loans has been a recurring theme in policy debates on the roughly $1.6 trillion in such debt that the U.S. government and private lenders hold. Calls for such forgiveness have increased now as the Joe Biden administration prepares to assume office.

However, partial or full student loan forgiveness is “regressive,” according to a recent working paper, titled “The Distributional Effects of Student Loan Forgiveness,” by Wharton finance professor Sylvain Catherine and Constantine Yannelis, professor of finance at the University of Chicago’s Booth School of Business. The paper’s findings are being actively discussed on Twitter.

“Any policy that is a universal loan forgiveness policy or a capped forgiveness policy – say forgiving debt up to $50,000 – is going to give most of the dollars in forgiveness to upper-income individuals,” said Yannelis, who was interviewed along with Catherine on the Wharton Business Daily radio show on SiriusXM.

Wharton presents a very good reason but the mortal hazard aspect is an even better one.

Biden is already bending to the wishes of Elizabeth Warren and Bernie Sanders to want to forgive student loans.

Schumer held a press conference alongside Democratic Congressmen-elect Ritchie Torres, Mondaire Jones and Jamaal Bowman of New York, during which the group announced they have “come to the conclusion” that Biden can “forgive $50,000 of debt the first day he becomes president.”

Even if legal, this is a terrible idea. It mainly benefits middle-class whites and unfairly so.

Less Education for Your Buck 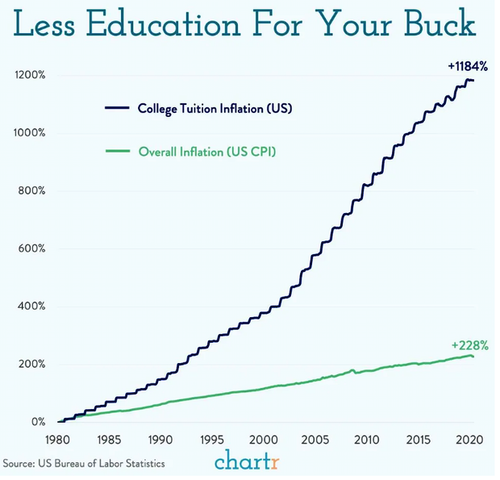 The above chart is from US College Tuition & Fees vs. Overall Inflation.

That act, which Republicans wanted and Bush signed made student debt non-dischargeable in bankruptcies.

I graduated from the University of Illinois in 1976 with a degree in Civil Engineering. The cost of tuition was $250 a semester when I entered college in 1971.

Some blame states for not contributing to education. Indeed, states would would not raise taxes to cover escalating costs because of voter backlash.

But that is blaming the disease on the symptom. The disease was then and still is high administration costs, public unions, outrageous coaching contracts, unbelievable pensions, and serious lack of competition.

The “Bankruptcy Abuse Prevention and Consumer Protection Act of 2005” made matters much worse.

For discussion, please see The Debt Deflation Guarantee Act of 2005.

It will do nothing to address the cost of higher education.

Forgiving debt fosters less competition and more graft and does nothing to fix any fundamental issues.

Covid-19: How Likely Is a Second Wave?