Remember this from The New York Times on January 8th…

“Mr. Sicknick, 42, an officer for the Capitol Police, died on Thursday from brain injuries he sustained after Trump loyalists who overtook the complex struck him in the head with a fire extinguisher, according to two law enforcement officials.”

And how it was peddled as fact, not pure speculation, rumor, or fantasy and parroted by every NeverTrumper as confirmation that Trump’s action led to the “murder” of a Capitol policeman. 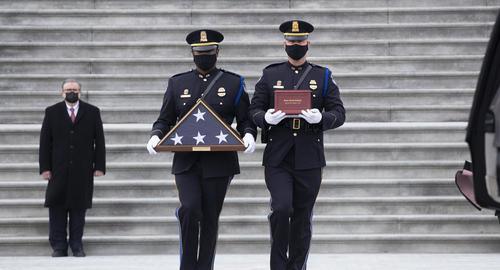 As a gentle reminder, a month later, NYTimes quietly retracted that claim:

And remember how a few weeks after that the officer’s mother said in an interview that the family also remained in the dark, though they believed that being bludgeoned was not the cause of death.

“He wasn’t hit on the head, no. We think he had a stroke, but we don’t know anything for sure. We’d love to know what happened,” said Sicknick’s mother, Gladys Sicknick.

And at the same time, no lesser establishment tool than FBI Director Christopher Wray refused to tell senators Sicknick’s cause of death. Wray claimed an “ongoing” investigation into Sicknick’s death (two months after the officer’s death!)

“I certainly understand and respect and appreciate the keen interest in what happened to him — after all, he was here protecting all of you. And as soon as there is information that we can appropriately share, we want to be able to do that. But at the moment, the investigation is still ongoing,” Wray said at a Senate Judiciary Committee hearing.

“We’re not at a point where we can disclose or confirm the cause of death.”

Well, we finally have some answers… and SURPRISE, they are not in keeping with the liberal media’s narrative. 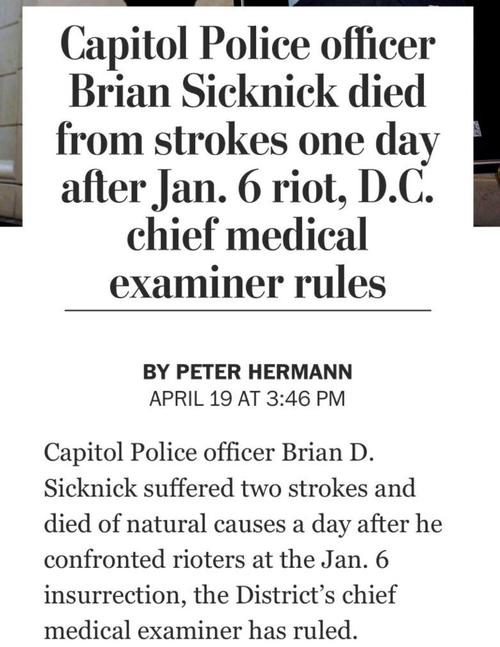 The Washington Post reported today that the D.C. chief medical examiner has ruled that Capitol Police Officer Brian Sicknick suffered two strokes and died of natural causes the day after he took part in defending the Capitol during the Jan. 6 riots.

Medical examiner Francisco J. Diaz, in an interview with the Post, said that Sicknick’s autopsy did not find any evidence that the 42-year-old officer suffered an allergic reaction to the chemical substance, which Diaz said would have caused Sicknick’s throat to seize.

Diaz also said there were no indications of internal or external injuries.

You mean to tell me that yet another narrative peddled and used by corrupt Democrat media to seize power and criminalize their opposition was a complete lie? I’m shocked. https://t.co/sKGVp9VZQO

It‘s sick how they used Sicknick’s death to try to cast every Trump voter as an extremist. Most never went inside that day. Rarely discussed is the fact Sicknick was also a Trump voter. Dems used his death anyways to smear a whole movement of people just like Officer Sicknick.

COVID vaccine deaths: the numbers point to a catastrophe

Biden Hikes Refugee Admission Cap To 62,500 After Outcry From Progressives