Another Nail In The Coffin Of Big Cities

Authored by John Rubino via DollarCollapse.com,

The riots, political turmoil, and other banana republic embarrassments seem to be ending – for now. So let’s get back to examining the real problems of this hyper-leveraged, dangerously-complex world. Like how big cities might soon be obsolete: 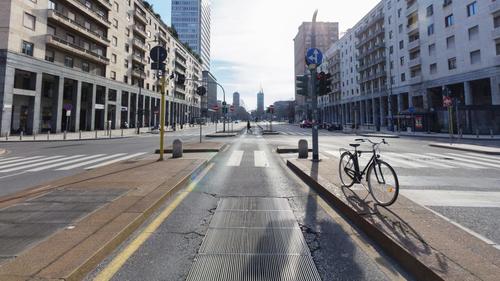 Pretend it’s 2019 and you’re living in a major US city. You, your spouse and two kids have a fairly nice (though admittedly very expensive) apartment in a relatively safe neighborhood, and life is pretty good. There’s a park nearby, dozens of great restaurants within walking distance, and plenty of interesting friends. And of course your high-paying jobs are right there.

Then comes 2020. A pandemic causes your mayor to panic and lock down the city. There go the park, friends, and restaurants. And before the horror of this new normal has a chance to sink in, civil unrest explodes and turns your once-iconic neighborhood into a Mad Maxian war zone of burned-out cars and boarded up storefronts.

If it was just you, you might stick it out. But with a family, this life is now untenable. So you look into moving, preferably to somewhere semi-rural where neither a lockdown nor riots will ever be a problem and the kids can actually play outside. Maybe it’s time to indulge your fantasy of working remotely from a homestead in a gorgeous place.

But you immediately hit a technological speed bump: Broadband Internet, which up to this point had seemed both ubiquitous and a basic human right, isn’t available on the homesteads you now covet. The only option out there is low-tech, unreliable, molasses-slow satellite Internet that, if the reviews are to be believed, is worse than nothing at all.

You realize that if you want to keep doing your work at a high level, you’ll have to stay urban, or at best suburban, with all the health and safety risks that that now implies. Big cities and their burbs, it seems, will live on for a while as necessary places for sophisticated professionals to do their thing.

Then Elon Musk, of all people, announces that SpaceX, his privately held space launch company, is going to blanket the sky with thousands of low-orbit satellites to create a global broadband network, and the roll-out has begun.

Early reviews are better than good:

Photos are starting to leak from SpaceX Starlink beta users, who are trying the satellite broadband service in remote areas for the first time. So far, the beta testing appears to be going far better than that of full self-driving.

One beta tester shared his experience on Reddit after he brought his Starlink equipment to a remote forest in Idaho. There, he said he was able to achieve 120Mbps download speeds and access the Internet at lightning-fast speed.

He wrote that the service “works beautifully.” He continued: “I did a real-time video call and some tests. My power supply is max 300w, and the drain for the whole system while active was around 116w.”

At his house, he said he got 135Mbps download speeds when the dish was at a ground-level spot with “limited obstruction.”

“Given all the obstructions for this connection at the moment, I am amazed at how well it works. Streaming, low-latency video conferencing, and gaming are all completely accessible with this service. Even for the beta, it appears as though they’ve under-estimated Starlink’s capabilities, so I am excited to see it mature.”

This isn’t as fast as an urban gigabit fiber connection, but it’s more than adequate for Zoom calls, shared coding projects and the like. And since these are beta-test results, it’s a safe bet that the final product will even better.

The advent of Internet-everywhere couldn’t come at a worse time for some of the cities that are already seeing big outmigration. As Wolf Richter just reported, rents are already plunging:

In the exodus cities, rents continued plunging in December. For example, in San Francisco, the median asking rent for one-bedroom apartments fell 1.5% from November and is now down 28% from June 2019; in New York City and in Seattle, rents fell about 2.5% for the month and are down 21% from July 2019.

Rents are depicting the massive shifts playing out in the US housing market, brought about by the Pandemic and by working from anywhere and perhaps by a general urge to rethink things.

San Francisco remains the most expensive rental market in the US only because rents are also plunging in New York City. The median asking rent in December for 1-BR apartments dropped another 1.5% from November, and by 24% year-over-year, and by 28.5% from June 2019, to $2,660, according to data from Zumper’s Rent Report. In terms of dollars, the drop since June 2019 amounted to $1,060 a month.

This does not include the widely advertised incentives of “two months free,” or getting popular, “three months free,” which cut effective rents for the first year by an additional slice: 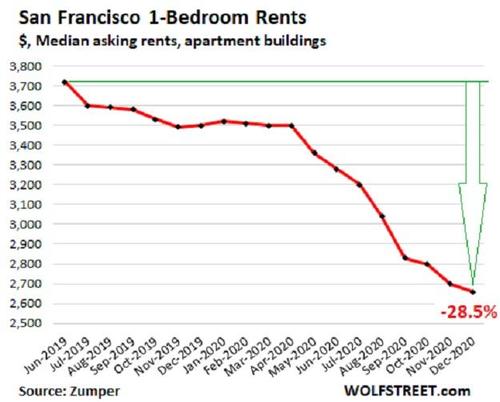 These are median asking rents in apartment buildings, including apartment towers. There are now reports of vacancy rates of 30% in luxury apartment towers in San Francisco, with landlords advertising “three months free.”

The financial implications of the emptying of big cities are immense. The list of cities and states that were already lurching towards bankruptcy via their wildly underfunded public sector pensions was already growing. And a federal bailout was already looking imminent before the chaos of 2020.

Now it’s a lock that in 2021 we’ll be faced with the choice of multiple municipal bankruptcies — which would threaten a national second Great Depression — or a multi-trillion-dollar federal bailout that threatens a currency crisis.

The next few weeks of relative peace are looking like a very temporary reprieve.