Another One Bites The Dust? – FinTech ‘Trading 212’ Halts Buying Of Penny Stocks

Color us not entirely shocked…

Less than a week after the “Game Stopped” hearings – designed not for grandstanding politicians to denigrate the professional class but to get to the bottom of how a decentralized collective of the great unwashed was allowed to (however briefly) compete, through an upstart broker, with the big boys of manipulation before being slapped back into their ‘properly’ lower place – it appears another super-exciting FinTech broker has run into issues.

Meet ‘Trading 212’ – a London fintech company “democratizing the financial markets with free, smart and easy to use apps, enabling anyone to trade equities, currencies, commodities and more.”

What we do is disrupt the stock brokerage industry by offering the first and only totally free and zero commission stock trading service in the UK and Europe, unlocking the stock market for millions of people.

Our mobile app has more than 14 000 000 downloads, making it one of the most popular trading and investing apps in the world.

Since 2016 we’ve been the UK’s #1 trading app, and in 2017 we reached the #1 spot in Germany. We’re also authorized and regulated by the Financial Conduct Authority. 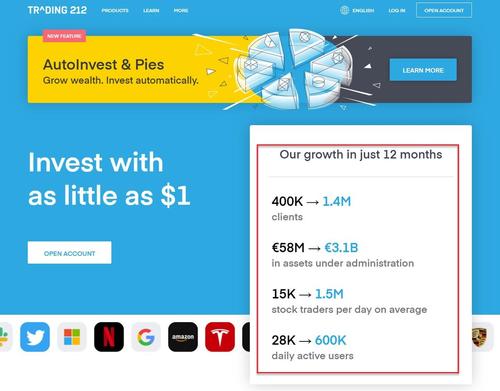 And as the most popular ‘penny stocks’ on WallStreetBets have been clubbed like a baby seal in recent days, it appears ‘Trading 212’ has been forced to go full ‘Robinhood’ and block buying of ‘illiquid OTC’ stocks. 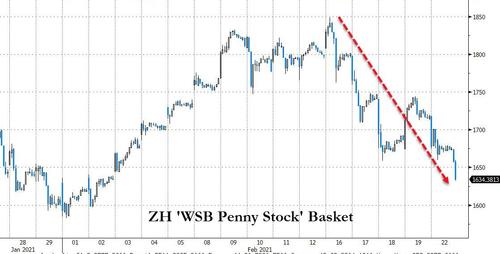 Not pretty, and sprinkle in some leverage and margin and hey presto: (emphasis ours)

During the recent months, there has been unprecedented market activity and volatility worldwide, including in U.S. microcap penny stocks. These stocks are especially risky due to the lack of liquidity, public information, and extreme volatility. Many microcap companies are new and don’t have any proven track record. That said, the recent trading frenzy has triggered concerns and investigations from regulators, and liquidity providers.

When there’s a sudden influx of orders for a certain microcap security, it triggers an investigation for market manipulation and could lead to a potential suspension of the stock.

Even when there’s no evidence for misconduct, brokers have to take care that the traded volumes are not disproportionate to the normal activity.

Based on the above, we are required to temporarily suspend the purchasing of penny stocks that are highly illiquid and have a market cap in the tens of millions. If we don’t do so, we risk being suspended by both the relevant exchanges and market makers.

The above is beyond our control and we have to comply with the regulations.

The huge inflow of new retail investors is an unprecedented phenomenon for the financial markets. Brokers, market makers, regulators and even exchanges are still trying to navigate this new environment. We will continue pushing forward to provide as much trading freedom as is possible within the regulatory framework.

A notice indicating that the purchasing is suspended will be placed on each of the affected stocks.

We hope, for the sake of the reported €3.1 billion in assets under admin, that this works out for those 1.4 million clients.

So @Trading212 has restricted trades on $SGSI! Outrageous and clear ploy to induce people into panic selling because retail investors are making money on pennies! The quicker we get @WebullGlobal in the UK, the faster we can put an end to this corruption!

Remember When The Democrats Challenged The Electoral Vote Count In 3 Elections Over 20 Years?