Call it the latest economic paradox.

Despite widespread stories of doom and gloom about the state of US consumer finances once the fiscal stimulus bill expires on Dec 31, the latest NY Fed survey of consumer expectations unexpectedly shows that US consumers have little intention of slowing down their spending. In fact, and very paradoxically, despite depressed and flat income and earnings growth expectations, with median one-year ahead expected earnings growth at 2.0% for fifth consecutive month and expected income growth barely little changed at 2.14% … 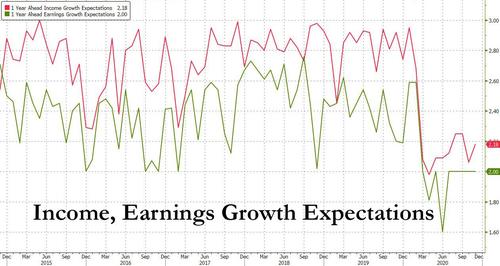 … consumers’ 1-year ahead spending growth expectations jumped to 3.73% over the next 12 months in November – the highest level in more than four years, not only up from the 3.06% in the previous month but a whopping 33% more than the 2.8% reported last November, making this the biggest Y/Y increase in expected spending in series history. 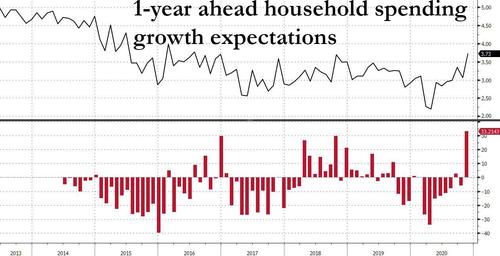 This bizarre increase took place even as labor market signals were mixed: although the mean perceived probability of losing one’s job in the next twelve months decreased to 14.6% in November from 15.5% in October, expectations that the unemployment rate will be higher one year from now rose to 40.1%, the first increase since July. 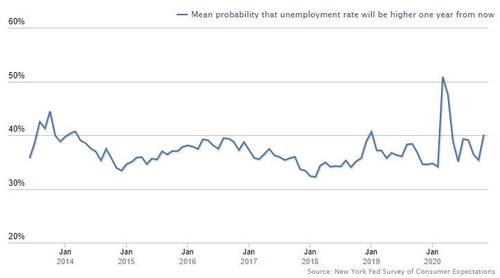 Another paradox: the jump was driven primarily by respondents with annual incomes under $50,000, the New York Fed said, although most income groups indicated a higher expectations to spend in the next year. 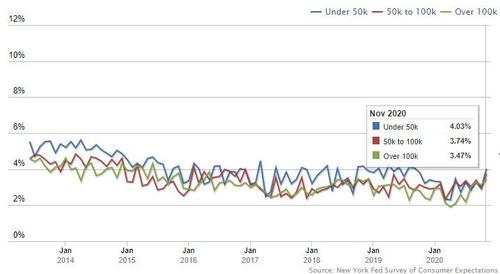 And yet another paradox: survey respondents boosted their plans for spending even as they reported greater pessimism about their personal finances overall in the year ahead, as well as an expectations that taxes will be generally higher in the coming year. 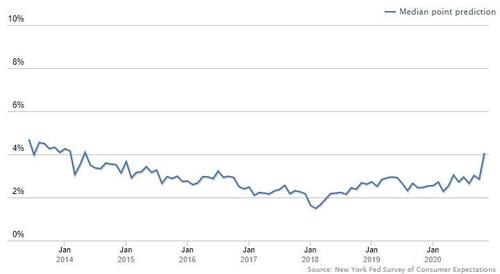 There’s more: whereas in April, or just after the covid crash, expectations for higher stocks surged to the highest on record boosting overall spending expectations, since then they continued to slide, and in November dropped to just 38.54% from 40.8% in October, the lowest reading since August 2019. 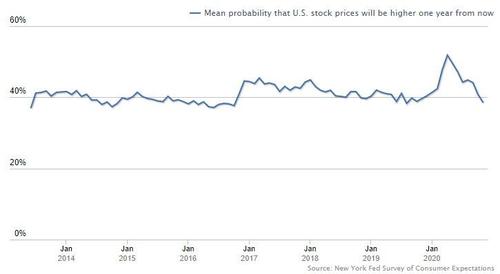 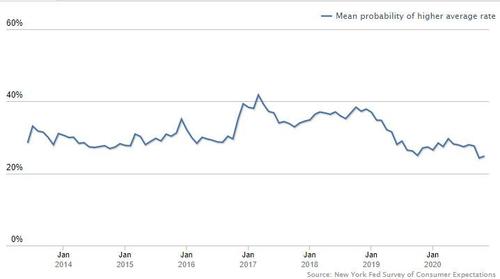 …  one wonders: why all this spending optimism. Well, with a little digging, the answer presents itself and it is once again the dirtiest four letter word of all: US consumer expect government debt levels will continue to soar to pay for future fiscal stimulus plans and thus funding all of these incremental purchases that are already factored in, even without income or earnings growth. 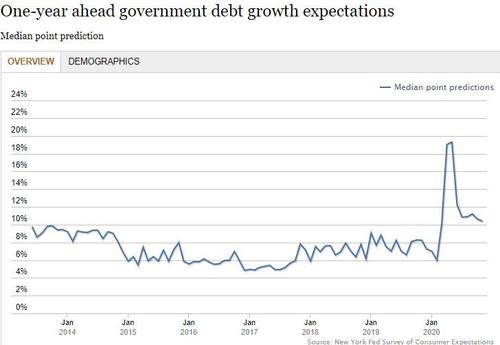 As the NY Fed puts it, the latest survey “shows some moderation in expectations regarding year-ahead changes in welfare and unemployment benefits, with the average likelihood of further expansions falling to 32 percent and 31 percent in August from 39 percent and 53 percent in April, respectively. Despite the decline, expectations of continued program expansion or benefit-level increases remain considerably higher than pre-COVID-19 levels.“

In other words, US consumers have finally figured out what US corporations figured out long ago: in this world, the only source of purchasing power (and consumer happined) is debt. And with the arrival of a “jubilee” administration that is likely to discharge much of the accumulated debt, one can see why US households – drowning in debt and eager for more – are so optimistic about their spending plans.

And just to confirm that aside from spending the financial health of US consumers is absolutely dismal, the survey also found that 3-year inflation expectations rose 0.12% to 2.82%, gasoline prices are expected to rise 5.21%; food prices to rise 5.12%; medical costs to rise 7.07%; the price of a college education to rise 5.24%; rent prices to rise 5.48%. Finally, a larger percentage of consumers – 10.93% vs 9.3% in prior month – expect to not be able to make minimum debt payment over the next three months. That’s ok though, because if the debt amount is big enough, the creditor will have no choice but to agree to restructure it.

Democrat Official Who Pulled Knife On Trump Supporters Indicted On Weapons Charges; Media Tries To Frame Him As Victim