Even before the Ever Given became lodged in the Suez Canal, manufacturers around the world were struggling with the ramifications of a global shipping-container crunch creating bottlenecks in global supply chains. The problem started in the chaos of last spring. A surge in demand for PPE and other products resulted in more demand for shipping containers used to help ferry them to China, as well as African and South American Nations,

To be sure, China is seen as one of the biggest contributors to the container crisis, as snarls and delays at Chinese ports have impacted the availability of containers. 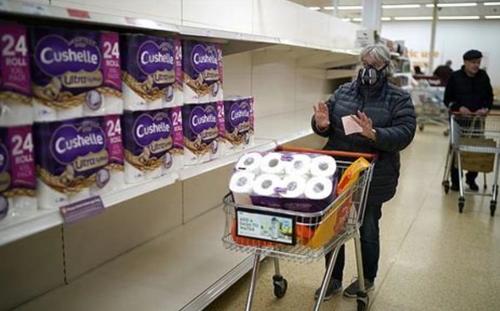 Setting the situation in the Suez aside, one of the world’s biggest producers of raw wood pulp, located in South America (far from the Suez), is warning that the container shortage could lead to another shortage of toilet paper on American shelves.

Most Americans probably remember the startling surge in stockpiling of toilet paper and other household essentials. Many were blindsided by it, or forced to be a premium for the stuff. Families around the country stressed out about the possibility that they might be left high and dry.

According to Bloomberg, the company, the Brazil-based company, Suzano SA, primarily ships its pulp in cargo vessels known as break bulk. But as demand for ships that can carry ribbed steel containers surges, break bulk rates and capacity are being squeezed.

For readers who aren’t familiar with the term, here’s a quick explanation of what constitutes “break bulk” (courtesy of LogisticsPlus):

What is Break Bulk Shipping? The term break bulk comes from the older phrase “breaking bulk” which is the extraction of a portion of the cargo on a ship, or the beginning of the unloading process from the ship’s holds. In modern context, break bulk is meant to encompass cargo that is transported in bags, boxes, crates, drums, or barrels – or items of extreme length or size. To be considered break bulk, these goods must be loaded individually, not in intermodal containers nor in bulk as with liquids or grains.

Break bulk was the most common form of cargo for most of history. Since the late 1960s, break bulk cargo has declined while containerized cargo has grown significantly. Moving containers on and off a ship is much more efficient than having to move individual goods. This efficiency allows ships to minimize time in ports and spend more time on the sea. Break bulk cargo is also more susceptible to loss, theft and damage.

Given consumers’ penchant for stockpiling and panic buying, a habit that emerged shortly after the pandemic emerged last spring, CEO Walter Schalka said in an interview that he’s worried all of this could snowball into another toilet paper shortage.

Sao Paulo-based Suzano is already concerned about the risk of exporting less in March than the company had expected, and being forced to roll over some shipments into April, Schalka said. With competition increasing for cargo vessels, break-bulk ships are berthing at the company’s terminals less often than usual.

“All the South American players which export through break bulk have faced this risk,” he said.

Brazil is the world’s top supplier of pulp, and Suzano accounts for about one-third of global supplies of hardwood pulp, the type used to produce toilet papers. Cargo-market disruption are wreaking havoc on global trade, especially for food and agricultural products, and the crisis in the Suez is already causing tanker rates to spike.

Narrator: “little did they know that this snafu could take down the entire toilet paper supply chain and 10% of global shipping trade”

Suzano’s warning is among the first major signs of strain in these shipping markets. If the squeeze drives up freight costs, it could also drive up prices of imported goods, stoking inflation, and creating new headaches for the Federal Reserve…and the market.

If you haven’t bought a bidet yet, now might be a good time.

Just How Cooked Is The Official Jobs Data: PwC Finds More Than Half Of US Companies Are Laying Off Workers

Taibbi: The Justice Department Was Dangerous Before Trump. It’s Out Of Control Now