It wasn’t nearly last month’s catastrophic 7Y auction but it wasn’t all that much better either.

Moments ago the Treasury sold $62BN in a closely watched 7Y auction (previewed here), which matched the record size for the tenor. 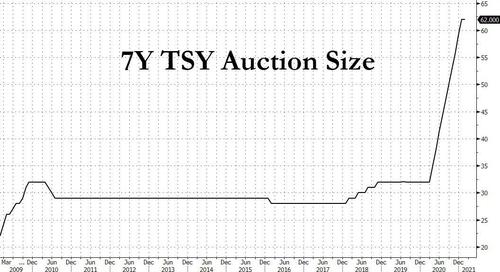 And while sentiment was far more positive heading into the 1pm deadline, traders were surprised to learn that the high yield on the auction was a rather dismal 1.30%, which tailed the When Issued 1.275% by a sizable 2.5bps and was the highest yield since Jan 2020.

Besides the unexpectedly large tail, the metrics were also ugly, if not nearly as bad as last month, with the bit to cover rebounding from last month’s disastrous 2.045 to 2.23, which nonetheless was rather low and well below the six-auction average of 2.28. Indeed, besides last month’s outlier BTC, this would have been the lowest print since August 2019. 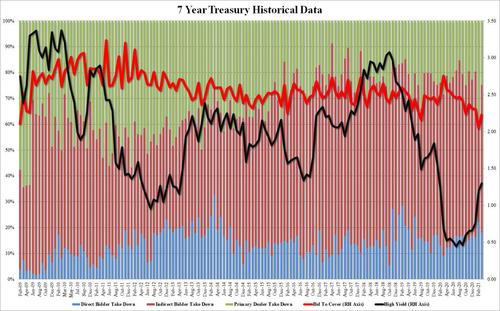 Big picture: the market was expecting a poor auction but one that was an improvement to February. It got just that, yet judging by the immediate back up in yields, the market was clearly disappointed by what it got, although now that the kneejerk move has stabilized, the 7Y is now just 1bp wider on the day so it appears that the early nervous jitters will be digested efficiently. 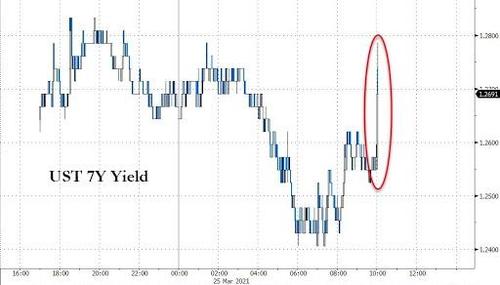