With the chances of the Senate actually convicting former President Trump in the upcoming impeachment trial, Sens. Tim Kaine (D-VA) and Susan Collins (R-INO) are quietly pitching their colleagues on a bipartisan resolution to censure Trump, according to Axios. 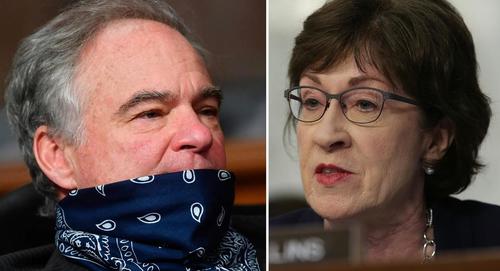 The Senators are ‘looking for a way to condemn Trump on the record’ as it’s become abundantly clear that Democrats don’t have the 17 GOP crossover votes required to gain a conviction for Trump’s second impeachment. That said, Axios says that some Democrats are only interested in censure if at least 10 GOP Senators will publicly commit to it – which would accomplish the 60-vote margin required to pass major legislation in the chamber.

It isn’t clear whether the censure would come after a trial, or be in lieu of it.

Driving the news: Kaine (D-Va.) and Collins (R-Maine) have been interested in a censure resolution for weeks now and have discussed it on multiple occasions.

Between the lines: In some ways, a censure vote could be more difficult for Republicans, because they can’t rely on the argument that a resolution is unconstitutional — like they are for an impeachment conviction.

What they’re saying: “I think it’s pretty obvious from the vote today, that it is extraordinarily unlikely that the president will be convicted. Just do the math,” Collins told reporters Tuesday afternoon.

Earlier Tuesday, Sen. Rand Paul (R-KY) excoriated Democrats over the impeachment effort against Trump for allegedly inciting the Jan. 6 Capitol riot, despite the fact that he told his supports to come, and leave, peacefully while protesting the results of the 2020 election.

“Democrats are about to drag our great country down into the gutter of rancor and vitriol the likes of which has never been seen in our nation’s history,” said Paul, adding “It’s almost as if they have no ability to exist except in opposition to Donald Trump”

“Democrats are about to drag our great country down into the gutter of rancor and vitriol the likes of which has never been seen in our nation’s history… It’s almost as if they have no ability to exist except in opposition to Donald Trump.” pic.twitter.com/kiCimV0GIX

Morgan Stanley Is Planning Ahead For A “Harder Summer”