A large group of Antifa terrorists rioted at the ICE building in South Portland this week.

Despite fleeing the US because of Antifa death threats, Conservative journalist Andy Ngo posted a series of videos Thursday showing the clash between Antifa terrorists and federal police.

Portland Police Bureau told local news KATU that “the group began blocking traffic by moving construction cones and barriers into the street just before 10:00 p.m.” Wednesday night. Thirty minutes later, police said the group lit a dumpster on fire, and that was when federal officers exited the ICE building and began to repel protesters.

At the #antifa riot at the Portland ICE facility overnight, they set a dumpster on fire & attempted to push it into the building. Federal officers came out to stop them. Antifa threw a mortar explosive at police. #PortlandRiots pic.twitter.com/KVMpAJ3LJ1

It took a little over two hours for the Feds to disperse the crowd. They said crowd control munitions were used, and one person was taken into custody.

Federal officers rushed out to make a targeted arrest of an #antifa at the riot outside the Portland @ICEgov facility last night. Karl Anders Nilsson, 20, was arrested & charged w/felony rioting & more. He was quickly released without bail. #PortlandRiots pic.twitter.com/yReHDao6C7

Ngo posted a picture of the Antifa terrorist who was arrested. 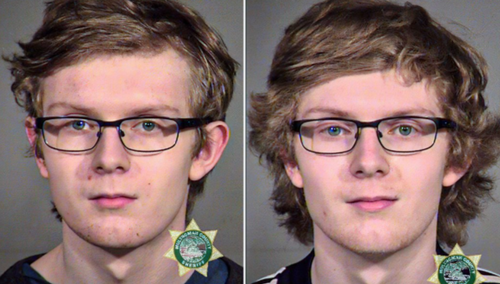 In response to the latest rioting in Portland, Mayor of Sandy, Oregon Stan Pulliam, a Republican, told Fox News that the chaos in Portland is what happens when there’s a push to defund police.

Did Gold Go Out Of Style?