Apple shipped 80 million phones in the final three months of 2020, surpassing rival Samsung to become the world’s top smartphone maker. The last time this happened was in 2016. Apple’s growth was primarily driven by the release of the 5G iPhone 12 series.

Due to the US government’s sanctions, Huawei suffered a massive slide in smartphone sales for the quarter, down 41%. The Chinese technology company sank to fifth place in the table below, beneath other domestic rivals Xiaomi and Oppo. 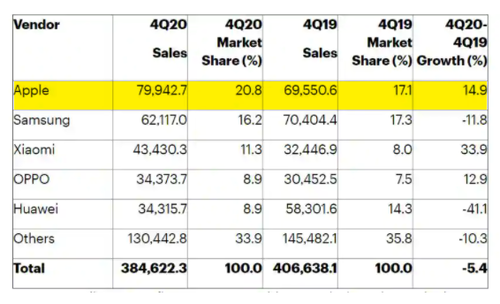 Anshul Gupta, senior research director at Gartner, wrote in the report that “sales of more 5G smartphones and lower-to-mid-tier smartphones minimized the market decline in the fourth quarter of 2020.”

Gupta said, “even as consumers remained cautious in their spending and held off on some discretionary purchases, 5G smartphones and pro-camera features encouraged some end users to purchase new smartphones or upgrade their current smartphones in the quarter.”

Gartner’s numbers indicate Apple has weathered the pandemic storm much better than its competitors.

Even though Apple led the fourth quarter, on a full-year basis, Samsung was the top smartphone vendor. Samsung posted a 14.6% decline year-on-year in 2020. However, the highest drop was suffered by Huawei. 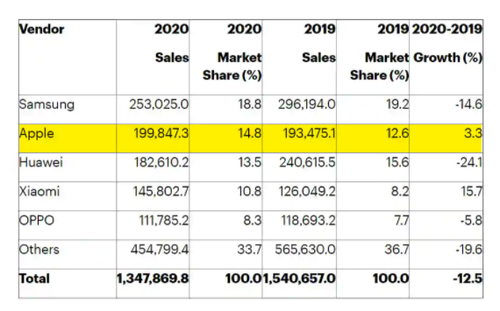 Overall, global smartphone shipments declined 5.4% in 2020 amid the worldwide coronavirus pandemic, according to Gartner.

“In 2021, the availability of lower end 5G smartphones and innovative features will be deciding factors for end-users to upgrade their existing smartphones,” he said. “The rising demand for affordable 5G smartphones outside China will boost smartphone sales in 2021.”