Back in May 2016, Japanese mega-bank Nomura, announced that it had suffered its biggest-ever loss in history (of a rather tame by Western standards $40 million) from a single client, and which it then quickly blamed on an “incompetent” bond trader.  Fast forward to today, when Nomura just suffered a far, far greater loss from a single client, this one is anything but boring.

Early on Monday local time, Nomura Holdings said it may have incurred a “significant loss” arising from transactions with a U.S. client.
The estimated amount of the claim against the client is about $2 billion based on market prices as of March 26, the Japanese brokerage said in a statement. The estimate is “subject to change depending on unwinding of the transactions and fluctuations in market prices.” 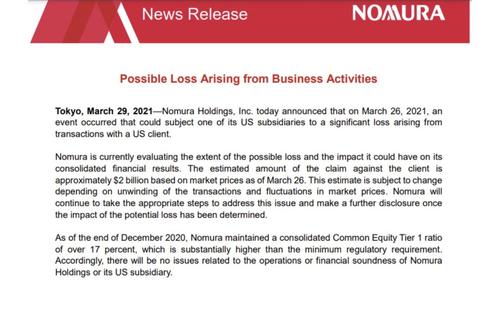 Nomura is currently evaluating the extent of the possible loss and the impact it could have on its consolidated financial results.
The Japanese brokerage also canceled plans to sell dollar-denominated bonds.

The news, incomplete as it may be, was enough to send Nomura stock crashing 15%, wiping out all March gains, and the biggest one day drop in a decade. 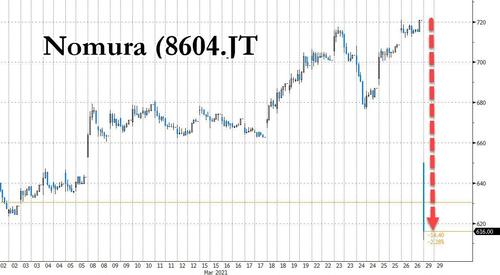 While it wasn’t immediately clear if Nomura’s loss is linked to the spectacular margin call at Tiger Cub Bill Hwang’s Archegos Capital which we noted earlier (accurately noting that the unwind is probably not yet done), the two are almost certainly linked especially as some have noted that in the case of Nomura, the bank owned some $10MM shares in Chinese tech firm GSX which imploded, via leveraged swaps to clients. Since GSX was one of the firms aggressively dumped by Hwang, one can see how the house of cards, having crippled Prime Brokers, may be spreading down the investment bank foodchain next.

The brokers became involuntary principals here, as they owned the shares outstanding on leveraged swaps to their clients. If the client can’t meet the margin calls, the brokers take huge losses. For example, Nomura “owns” 10M shares of $GSX as of 12/31/20.

Meanwhile, as we asked earlier, the real question is whether the liquidation of the handful of highly concentrated stocks is over, or whether the selling cascade is only just starting.

now that the entity liquidating media/Chinese tech stocks is know, will the market
I) keep pressing them lower to hurt Hwang’s “idea dinner” pals, or
ii) ramp them as no more selling pressure

One thing we do know: as of Sunday night, the seller was not done yet, as this Bloomberg headline confirms:

Morgan Stanley was shopping a large block of ViacomCBS Inc. shares on Sunday, according to a person familiar with the matter, the latest in a flurry of block trades that began before the weekend.

About 45 million shares were offered Sunday on behalf of an undisclosed holder, the person said. The media giant was also the subject of at least one large block trade on Friday through Goldman Sachs, a person familiar with the matter told Bloomberg at the time.

Which means there are now two big questions: i) is Archegos still dumping, or is this now a fellow Hedge funders who was also margined out on a similar portfolio, and ii) just how bad is the pain – as more prime brokers issue urgent margin calls – and how widespread will the liquidation chain stretch…

Is “It’s A Wonderful Life” The Perfect Christmas Film?