While the S&P closed at a new all time high, it was an ugly day for the so-called “Archegos stocks” which first puked two weeks ago when Bill Huang’s family office was margin called to oblivion… 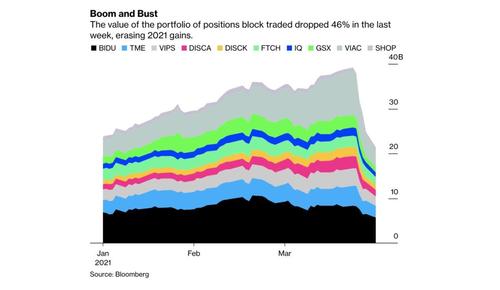 … and despite stabilizing last week, today the selling resumed despite an early bump as GSX Techedu and Tencent Music were among the biggest decliners (falling as much as 12% and 6.4%) while FarFetch dropped 6.1%, ViacomCBS was down as much as 5.3%, Discovery -5.8%, Vipshop -3% and Baidu -1.4%. 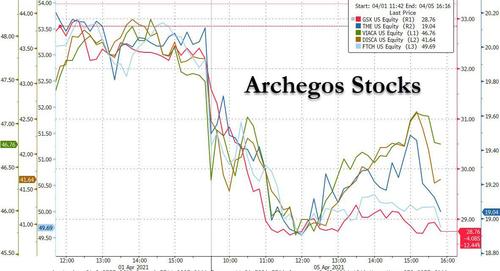 What was behind today’s latest puke in “Archegos” positions: after all there were no Prime Brokers dumping blocks today? The reason is growing twitter chatter that the big Prime Brokers with most exposure to Archegos have yet to come clean on their full losses, and the reason for that is that they still have exposure to the now collapsed family office.

They haven’t finished liquidation of Hwang.

As former Lehman trader Larry McDonald also chimes in, “Eight days after the Archegos hit – the scared rabbits across the Street have only been able to quantify a $10B to $12B loss, this fact gives the word “insult” new meaning.” The loss, in question, being as large as $100 billion (with crazy leverage), so it would appear that someone is hiding something.

It also means that they may have (much) more to sell, unless of course they come out publicly and deny rumors that they are still on the hook to the Hwang unwind. And while we wait for either confirmation or denial, here are some thoughts from Larry McDonald who writes in his latest Bear Traps report that Archegos may be the catalyst that triggers a deleveraging cycle.

As the calendar turns to April, the words we have lived by for nearly twenty years come to mind. “Higher prices bring out buyers, lower prices bring out sellers – size opens eyes.” Over the last week, it was the size of the losses inflicted on Wall St. banks – all delivered from one SINGLE family office that has caught our attention.

Eight days after the Archegos hit – the scared rabbits across the Street have only been able to quantify a $10B to $12B loss, this fact gives the word “insult” new meaning.

Of course, the pain inflicted comes after the Robinhood blowup, the Melvin Capital collapse and the Greensill implosion in Europe, all idiosyncratic, NOT. The Nasdaq bulls talk up “one offs” – but the these events are piling up which points to a classic, systemic leverage breaking point.

The size and breadth of today’s bull camp incentivizes market participants to downplay encroaching risk. Almost everyone is fully invested and using leverage for more juiced returns. This crowd will go out of their way to tell the bartender it’s only midnight – when a glance toward the watch says it’s half past 2AM. Just think about how long it takes Wall St. banks to come clean to leverage losses. History tells us – the lonely truth will join us one drop at a time.

Bull markets never, EVER die of valuation old age, its the leverage blow-up which triggers the deleveraging and takes the madness out of the crowd. Just look at the ARK ETFs, the marginal – over the top buyer is taking the sword as we speak.

Every hedge fund compliance officer across the Street is now in search of the next Archegos, and they have as much trust in their prime broker as the lovely Marylin Monroe had in the playboy that was JFK.

Incidentally, as McDonald also writes, the plunge in ViacomCBS and Discovery shows us that when growth and tech sell-off hard, it can open up pockets of weakness in the market, “that are potentially systemic.The recent Archegos saga was NOT an anomaly. Bill Hwang is not the only investor who has been levered-long tech and growth stocks. The de-leveraging that took place last week was so important because as yields continues to rise, more of these are coming… When momentum-longs can blow up with Earth shattering monetary and fiscal stimulus, imagine the fallout when said stimulus is withdrawn.”

All of the above considerations are why McDonald has decided to cash out for the time being:

There are times to take on more risk and other inflection points which whisper into the wise man’s ear, “reach across the velvet and pull some chips off the table.” This is one of them, let the mad mob chase. For much of the last six months we have been in the growth to value camp, pounding the table on the migration of capital running out of Big Tech over to equities in the commodity sector. As most of our long term clients know, we have never been more bullish. Our focus has been on rotation – NOT a drawdown leaking across asset classes.

Today, we must make a stand. It’s time to take down risk positions across the board and let the fools chase.

Than again, one look at what stocks did today and it appears that fools are now firmly in charge.

Which is why we leave the last word to an equity PM and member of the Bear Traps chat room who summarized the situation perfectly:

“Insane bubble, like mania, like madness. We just have to review the family office chap running a position of $100B (estimated numbers). He dropped $15B of equity -his NAV -and banks lost a further $10B as they executed stop outs… These are insane numbers of a gambler…Yet it’s brushed off after 24 hours and it’s back to buying…

Couldn’t have said it better.

US Life Expectancy In 2020 Saw Biggest Drop Since WWII