Are Americans Really Going To Spend $2 Trillion In “Excess Savings”

In an article published last week, a group of Fed researchers argued that the high savings accumulated by US households over the last year might not be “excessive”. This, as most sellside researchers and most recently, Deutsche Bank rates strategist Stuart Sparks notes, is “an important claim because the reflation narrative posits that as the economy reopens from the pandemic, the release of “forced savings” would accentuate fiscal stimulus in pushing growth beyond potential, raising delivered inflation, and nudging inflation expectations higher.”

Indeed, while fiscal stimulus has been quite large, the reflation argument would be weaker on the margin if households did not spend savings accrued during the pandemic period. 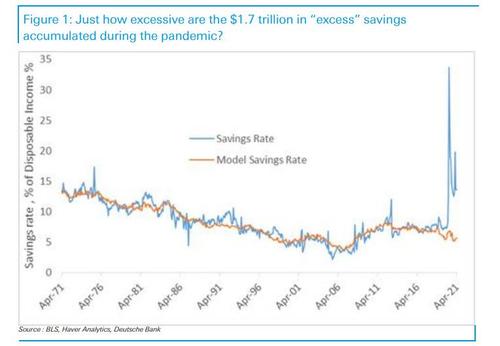 To be sure, the numbers are massive. The chart above from DB illustrates the personal savings rate as a percentage of disposable income, and model value. The actual savings rate has been pushed higher by i) some combination of forced savings (merchants closed due to the pandemic), ii) savings from stimulus checks, and iii) increased levels of precautionary savings.

The savings rate climbed from 7.2% in December 2019 to as high as 33.7% in April 2020, and currently stands at 13.6%. DB’s model value has declined modestly over the period from 6.5% to 5.7%. For those curious, the model posits the savings rate as a function of real 10y yields, the participation rate, the unemployment rate, the real y/y growth rate in average hourly earnings, and household net worth as a
percentage of disposable income and is estimated from monthly data from 1970 to the present. More importantly, the model works because it “explains 88% of the variance of the savings rate during that period.”

However, the Fed researchers argue that there are (at least) three reasons that households might not treat these savings any differently from savings during other periods:

The last point, for example, is frequently made with the rhetorical question “how many haircuts can one get?” – the point being that there might be some “catch up” spending, but some services spending is foregone.

More broadly, as Sparks concludes, survey data suggests that the proportions of stimulus checks spent and saved have been broadly consistent with past transfers of the same sort. The inference would be that there is little reason to expect “corrective” spending.

Then It’s Not a Vaccine: Crazy Dr. Fauci Says Early COVID Vaccines Will Only Prevent Symptoms and NOT Block the Infection …What?