There is plenty of blame to go around but where is the preponderance? 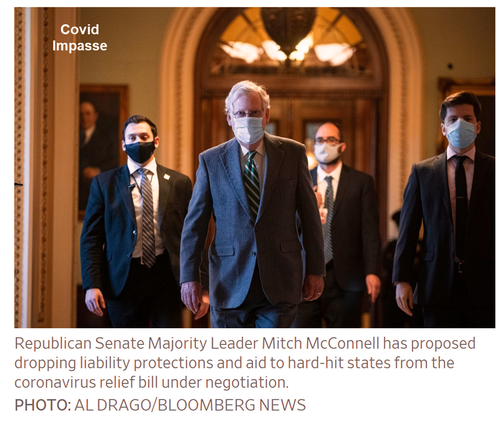 A bipartisan coalition has been working to reach a Covid compromise on state and local aid plus a liability shield.

The bickering seems endless. It’s been ongoing since September.

Top Senate Republicans signaled Thursday they wouldn’t accept a bipartisan group’s efforts to craft a compromise on state and local governments and liability protections during the pandemic, undercutting the coalition’s attempt to break the months-long impasse over a coronavirus relief package.

“My sense is that they’re not going to get there on the liability language,” Senate Majority Whip John Thune (R., S.D.) told reporters Thursday. “Even though they spent a lot of time trying to come up with sort of creative, innovative solutions to it, they’re just not going to be able to thread the needle.”

Aides to Senate Majority Leader Mitch McConnell on Wednesday night told the staff of House Speaker Nancy Pelosi (D., Calif.), Senate Minority Leader Chuck Schumer (D., N.Y.) and House Minority Leader Kevin McCarthy (R., Calif.) that he didn’t see any possible path from the bipartisan group on those two contentious issues that would be acceptable to Republicans, according to a senior Democrat familiar with the conversations.

Trump muddied the water for no reason, siding with Bernie Sanders of all people.

Previously, Trump objected to blanket checks on the basis some people make more being unemployed than employed. He was correct then, not now.

But that is not where the blame goes.

Senate Majority Leader Mitch McConnell came up with an easy compromise: Put off liability and other contentious issues until next year and agree on a basic package.

Until this week, Mr. McConnell had said that any package that passes the Senate must include beefed-up legal protections for businesses, schools and other entities operating during the pandemic. On Tuesday, Mr. McConnell instead urged moving forward with a smaller relief package that omits both the liability provision that Republicans want, as well as state and local funding, a Democratic priority, saying they could potentially be addressed next year.

“Our Democratic colleagues have not even let us pass noncontroversial money to invest in vaccine distribution,” Mr. McConnell said on the Senate floor Thursday. “Not unless the two parties settle a whole list of issues that are controversial the way they want.”

On December 26, all the pandemic benefits at the Federal level expire in every state.

For many states and millions of people, Federal benefits have already expired.

McConnell’s compromise would get checks into the hands of the unemployed and provide money for vaccine distribution as well.

Nancy Pelosi suggested liability for 6 months, but that solves nothing.  Lawyers would wait 6 months then fire a barrage of lawsuits.

Ironically, McConnell’s compromise leaves intact all lawsuits if you spend 2 seconds to think about it.

This one is easy. Nearly all of the blame goes to the Democrats for not accepting McConnell’s offer to do something that both sides agree on. 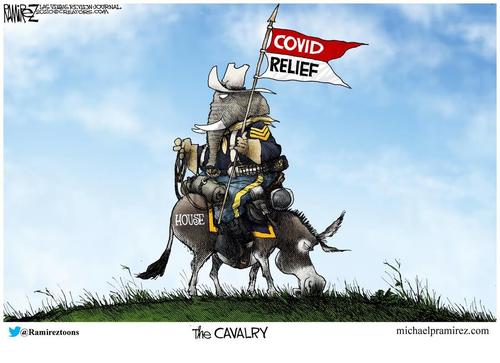 If Trump were to veto such a package, then the blame would go to Trump (or Republicans for not overriding the veto).

For discussion of expiring benefits and the number of people affected, please see Unemployment Claims Jump to Highest Level Since September