With ARK Invest’s flagship ARKK fund now about 9% on the year (and about 25% off its 52 high, set in February), the time seems just about right for the investment manager to launch its latest ETF.

And that’s exactly what its doing. The investment manager’s forthcoming space-focused ETF, which will trade under ARKX, could hit exchanges for trading as early as this upcoming week, according to Bloomberg. It’ll be the first new “product” from Cathie Wood and ARK since 2019.

Wood already has five actively managed funds and two that track indexes. While 2021 has been rocky for many of them, ARK continues to get play in the financial media due to ARKK’s meteoric rise of 154% over the last 12 months (which, again, was mostly attributable in our opinion to a gamma squeeze in Tesla and the NASDAQ).

Matt Benkendorf, chief investment officer of Vontobel Quality Growth, said: “It’s certainly what the market has appetite for right now. Ark has shown a tremendous propensity to attract money, and all eyes are on them.” 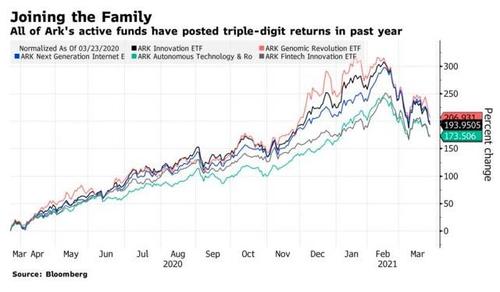 The fund could launch as soon as March 29, Bloomberg wrote. Names in the industry, like Virgin Galactic Holdings and Maxar, rallied earlier this year in anticipation of the fund’s launch. The Procure Space ETF has also seen its assets more than triple over the same period of time.

“They’ve certainly built up a loyal following of investors that will seed that fund well. It just seems like a good encapsulation of the market moment that we started the year in, with all the money going into these super high-growth, long-term ideas,” said Ross Mayfield, investment strategy analyst at Baird.

Retail investor Mark Leclair told Bloomberg he “already set aside some money” to invest in ARKX: “I’m going to jump all over that. Cathie is doing her own research and analysis, and she is making conclusions that the Street just doesn’t see. It really aligns with what I believe in which is trying to make smart investments in industry disruptors.”

We noted months ago that short interest in ARK funds had “exploded” after ARK’s banner 2020. Short interest as a percentage of shares outstanding for the firm’s flagship $21 billion ARK Innovation ETF spiked to an all time high of 1.9% from just 0.3% two months ago, according to data from IHS Markit Ltd. and Bloomberg.

We were one of the first to highlight how the law of large numbers could eventually stand in the way of Cathie Wood’s success. So far, Wood has been able to avoid catastrophic collapse – but if you feel the gamma squeeze ending in the NASDAQ has only just started the volatility, the rest of 2021 could be one for the ages.

Governing By Rage And Ridicule