One of the big things that has helped ARK’s public image during its wild run to over $50 billion under management has been its stated commitment to transparency. Every day, at the end of the day, ARK has been emailing out its trades so that followers of the firm and investors can see which stocks “visionary” stock picker Cathie Wood and her team are moving in and out of.

Except now, after a week mired by several days of massive outflows, it appears that ARK Invest isn’t exactly disclosing all of its sales anymore. In fact, it’s adding numerous disclosures and disclaimers to its daily e-mail lists.

What used to be a simple spreadsheet showing buys and sells now comes with a warning that the list of trades going out “exclude initial/secondary public offering transactions and ETF Creation/Redemption Unit activity.”

Look what they finally put in (in quotation marks):

In fact, the entire disclaimer can be found on ARK’s site, here, admitting that trade files do not include certain trades.

Trade notifications are for informational purposes only. ARK offers fully transparent ETFs and provides trade information for all actively managed ETFs. ARK’s statements are not an endorsement of any company or a recommendation to buy, sell or hold any security. Trade notification files are not provided until full trade execution at the end of a trading day. ARK may not trade every day. The time stamp of the email is the time of file upload and not necessarily the exact time of the trades. Files of trades are not comprehensive lists of a day’s trades for the ARK ETFs and exclude initial/secondary public offering transactions and ETF Creation/Redemption Unit activity. Additional files may be posted at a later time. Most ARK ETF portfolio trades settle on a T+2 basis. These files represent an UNOFFICIAL, UNRECONCILED account, as all official accounting and custody processes for the ARK ETFs are performed by BNY Mellon resulting in a daily Net Asset Value (“NAV”) for the ARK ETFs. Updated ARK ETF end of day holdings are available on ark-funds.com/investor-resources.

As often happens when funds start experiencing a little chaos, the goal posts appear to be in motion. Recall, just two days ago we noted record outflows for ARK’s flagship ARKK ETF. The fund saw over $200 million in outflows, breaking with a trend it had been setting in the 18 months prior of continued, seemingly endless, inflows. 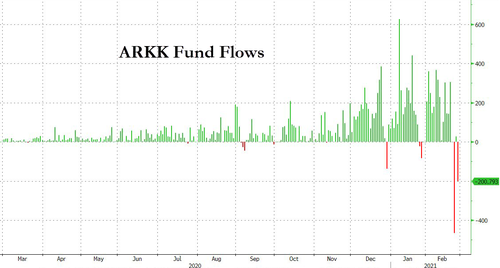 Between five of ARK’s ETFs, Wood saw outflows of $443 million in one day, at one point last week.

Additionally, Jesse Felder noted last week on Twitter that more people now, than ever, were either lining up specifically to bet against Wood, or using her funds as a levered ShitCo-specific vessel for positioning short the index itself. After all, what speculative names go up, must come down.

‘The number of put options outstanding on the ARK Innovation exchange-traded fund — which would pay off if the ETF’s price declines — has hit a high of 368,000 contracts.’ https://t.co/lAIbzUIeAP pic.twitter.com/6FyDEOkvin

Doubts about Wood’s stock picking acumen seem to be growing. Short bets against ARK continue to rise – a trend we first pointed out that had started weeks ago. “The average short interest as a percentage of float for ARKK holdings is 4.4%,” Bloomberg noted this weekend. “The average is 3.4% for Russell 3000 companies and 2.3% for those in the Russell 1000.” 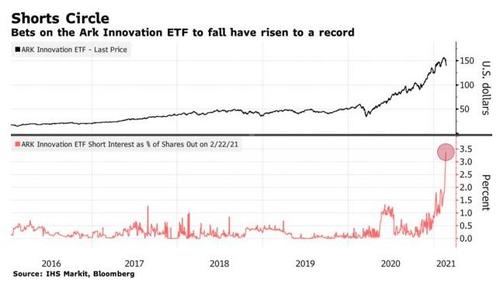 But even still, the worst may be yet to come. The Big Short’s Michael Burry took a shot at Wood when he noted mid-day on Sunday that he thought she was “too early” and “too hot”. He tweeted that “today, short sellers are timid, but Wall Street will be ruthless in the end”.

To make his point that the worst could be yet to come, he noted that of the 29 stocks ARKK owns 10% or more of, only 5 have seen more puts than calls trade on average over the last 5 days. Burry is ostensibly suggesting that there could be a long way to go for the Cathie Wood pain-trade.

It also appears as though due to Wood’s recent positioning – which we noted last week included selling out of well known liquid names and piling into some speculative tech small caps – that liquidity could be an issue.

@ARKInvest is facing daily fund outflows of 1.4% of their AUM this week. They’re trimming all positions as this happens.

ARK’s most illiquid positions are shitco’s, listed here by the number of days it would take ARK to exit, based on avg daily volume. ur welcome. $TSLAQ pic.twitter.com/srg7OHkb36

This is likely what the above put buyers are betting on.

As we have continually noted, one thing Wood hasn’t had to deal with over the last 18 months during her meteoric rise has been a serious sell off in Tesla. And the stock – one of the main driving forces behind Wood’s investing “genius” – has continued to look shaky over the last week while, at the same time, Bitcoin – another asset with numerous ties to Wood’s portfolio and positions – continues to also be volatile.

We noted several weeks ago that short interest in ARK funds had “exploded” after ARK’s banner 2020. Short interest as a percentage of shares outstanding for the firm’s flagship $21 billion ARK Innovation ETF spiked to an all time high of 1.9% from just 0.3% two months ago, according to data from IHS Markit Ltd. and Bloomberg.  That number now stands at nearly 3.5%, as evidenced in the chart above.

We were one of the first to highlight how the law of large numbers could eventually stand in the way of Cathie Wood’s success.

German Power Plant Halted After It Runs Out Of Coal